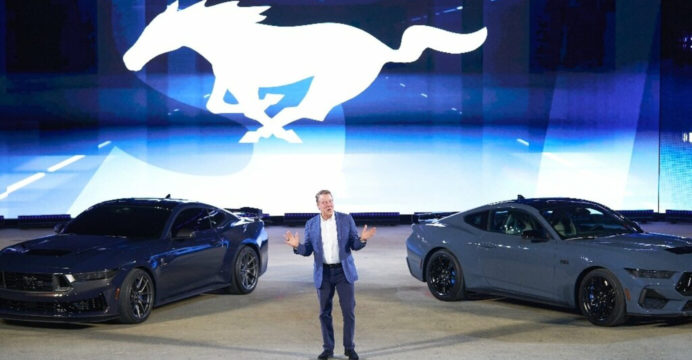 Revealing that there are exceptions to Detroit’s electric vehicle push, Ford Wednesday unveiled its seventh-generation Mustang, a gas-powered sedan that the Michigan company suggested could be the best yet.

The latest Mustang — once the inspiration for a Serge Gainsbourg song and seen in some 3,000 movies — features a “fighter jet-inspired” interior and performance features that makes it “the most exhilarating and fun-to-drive yet,” Ford said.

Ford, which has dived into EV investment as much as any company in recent years, made no apologies for extending the Mustang’s petroleum-oriented future, reports BSS.

“Investing in another generation of Mustang is a big statement at a time when many of our competitors are exiting the business of internal combustion vehicles,” said Jim Farley, CEO of Ford Motor Company in a press release.

“Ford, however, is turbocharging its internal combustion engine (ICE) growth plan, adding connected technology, opinionated derivatives, and hybrid options to our most profitable and popular cars — all in the Ford Blue family — on top of investing $50 billion in electric vehicles through 2026.”

The newest Mustang nods to earlier versions in the model’s 58-year history in its lighting and grille design, while also employing the latest in digital technology. This includes a key fob that lets drivers who love the sound of an engine revving satisfy their fix with the press of a button.

In extending the Mustang’s run, Ford’s move runs counter to some other brands like Dodge, which in August said it was phasing out gasoline-powered Muscle car models the Challenger and Charger.

Ford’s vehicle launch event also invoked some of the panache of past car shows at a time when the industry has been moving away from the marketing model in favor of online launches.

The Detroit Auto Show of yore was known for stunts like the 1992 arrival of the Jeep Grand Cherokee, which announced itself by crashing through glass. For Wednesday’s Mustang launch, Ford organized a “Stampede” of earlier Mustangs that caravaned from around the country to Hart Plaza in downtown Detroit.

Participants were encouraged to participate in a best-dressed contest of “attire inspired by their favorite period in Mustang history, from the 1960s through today,” with the first-place prize a two-year car lease for a new Mustang.