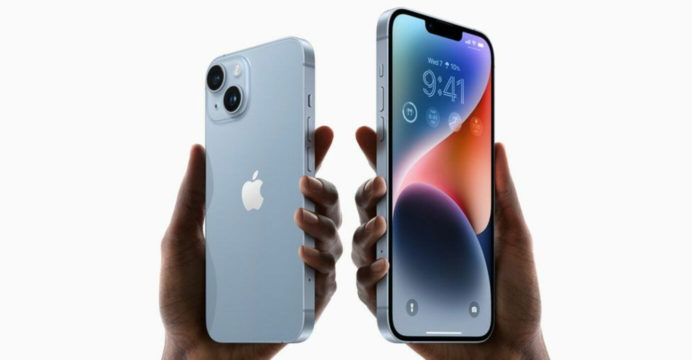 Apple has unveiled the iPhone 14, with emergency satellite connectivity and car crash detection technology, at a launch event in the US. The company revealed four versions of the new handset at its Cupertino headquarters, with an audience attending in person for the first time since the pandemic.

Apple CEO Tim Cook was on stage at the Steve Jobs theatre inside the tech giant’s California campus – but the presentation itself was entirely pre-recorded.

The company is releasing the iPhone 14 in two sizes, the iPhone 14 and the iPhone 14 Plus. The new handsets are capable of sending an emergency call for help via satellite. The phone will display the whereabouts of passing satellites overhead and demonstrate how to point the device at them correctly.

It can take from 15 seconds to a few minutes to send a basic message.

“The investment to add satellite capability should not be underestimated,” said Ben Wood, chief analyst at CCS Insight.

“It will likely have taken Apple years to put all the pieces of the puzzle in place, including a commercial agreement with satellite provider Globalstar, and the creation of the infrastructure needed to pass messages to the emergency services.”

Tech analyst Paolo Pescatore said he believed the innovation was good news for consumers “in hard to reach areas”.

“It is encouraging to see providers starting to get serious about using satellite – ultimately reliable and robust connectivity is still highly sought after among all users,” he said.

The tech giant announced a new 12-megapixel camera, capable of taking photos of fast-moving subjects, and the company claims a 49% improvement in low-light capturing. The front camera also included auto-focus for the first time, to help sharpen selfies.

The biggest change in iPhone 14 Pro and iPhone 14 Pro Max design is the top of the screen which is now a pill shaped cut-out. A feature called the Dynamic Island has replaced the black notch, which many iPhone users complain about – and it can change shape depending on what notifications there are.

The other big change is that the handset can always remain on. When the phone is not in use, the screen dims and the refresh rate is lowered.