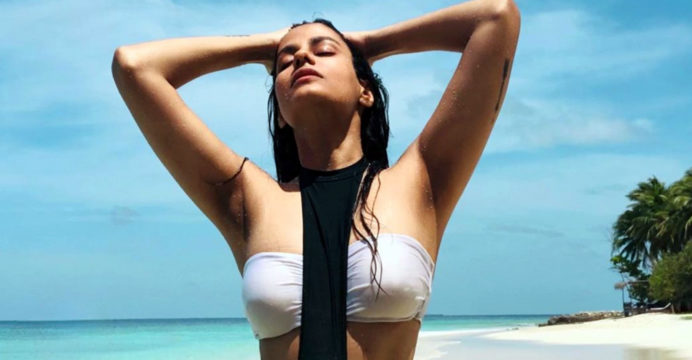 One of the finest actresses working today is Shreya Dhanwanthary. She is very active on social media and is currently the reason behind the rising temperature. She released some sizzling photos from her daring photo shoot on Sunday, and these have already gone viral online.

Fans are going crazy about the actress from “The Family Man” who has been posting sensual photos of herself on social media. Shreya recently sparked controversy with photos of herself wearing a denim jacket and black underwear.

She exuded sex in a really sexy avatar, and they have swept the internet by storm. Can we really blame her for the millions of hearts her braless photos are receiving on social media?

Emoticons of fire and the heart-eye were frequently used in comments by fans. She was described as “hottest” by one user and as “sexy” by another. Even one of the admirers said, “Haye Garmi.”

Shreya had previously released photos of herself wearing a black bra and matching high-waisted seamless bottoms, and the public adored them.

On the professional front, Shreya is getting ready for the Disney+ Hotstar premiere of her short film “Birth.” She also has Sunny Deol, Dulquer Salmaan, and Pooja Bhatt’s role in R Balki’s “Chup” in her collection.