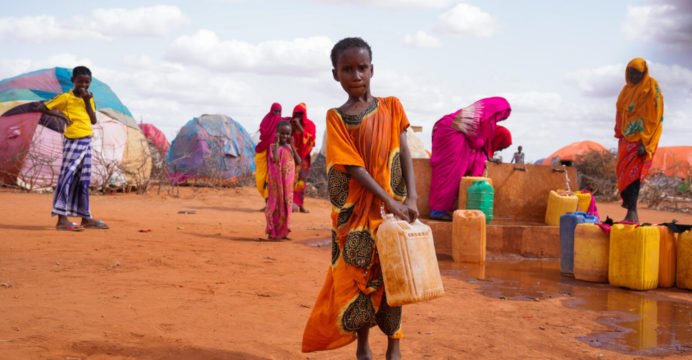 Children in the Horn of Africa and the Sahel could die in devastating numbers unless urgent support is provided, as severe malnutrition and the risk of water-borne disease collide – UNICEF warns during World Water Week.

“History shows that when high levels of severe acute malnutrition in children combine with deadly outbreaks of diseases like cholera or diarrhea, child mortality rises dramatically – and tragically. When water either isn’t available or is unsafe, the risks to children multiply exponentially,” said UNICEF Executive Director Catherine Russell. “Across the Horn of Africa and the Sahel, millions of children are just one disease away from catastrophe.”

The number of drought-hit people in Ethiopia, Kenya and Somalia without reliable access to safe water rose from 9.5 million in February to 16.2 million in July, putting children and their families in increased danger of contracting illnesses like cholera and diarrhoea1.

In Burkina Faso, Chad, Mali, Niger and Nigeria, drought, conflict and insecurity are driving water insecurity, with 40 million children facing high to extremely high levels of water vulnerability2. Already more children die as a result of unsafe water and sanitation in the Sahel than in any other part of the world, according to the latest WHO data.

Most people in the Horn of Africa rely on water delivered by vendors on trucks or donkey carts. In areas worst hit by drought, water is no longer affordable for many families3.

More than 2.8 million children across both regions are already suffering from severe acute malnutrition, which means they are up to 11 times more at risk of dying from water-borne diseases than well-nourished children.

In Somalia, outbreaks of acute watery diarrhea and cholera have been reported in almost all drought-affected districts, with 8,200 cases reported between January and June, more than double the number of cases reported during the same period last year.

Almost two-thirds of those affected are children under the age of five. Between June 2021 and June 2022, UNICEF and partners treated more than 1.2 million cases of diarrhea in children under the age of five in the worst drought-hit regions of Ethiopia – Afar, Somalia, SNNP, and Oromia. In Kenya, over 90 percent of open water sources – such as ponds and open wells – in drought-affected areas are either depleted or dried up, posing a serious risk of disease outbreak.

Across the Sahel, water availability has also dropped by more than 40 percent in the last 20 years due to climate change and complex factors such as conflict, putting millions of children and families at increased risk of waterborne diseases. Just last year, West and Central Africa marked the region’s worst cholera outbreak in the last six years, including 5,610 cases and 170 deaths in Central Sahel.

UNICEF is providing life-saving aid and resilient multisectoral services to children and their families in dire need across the Horn of Africa and the Sahel, including improving access to climate-resilient water, sanitation and hygiene services, drilling for reliable sources of groundwater, and developing the use of solar systems, identifying and treating children with malnutrition, and scaling up prevention services.

UNICEF’s appeal to improve families’ long-term resilience in the Horn of Africa region – and stop drought devastating lives for years to come – is currently just 3 per cent funded. Of that, almost no money has been received for the section devoted to water, sanitation, and climate resilience. The appeal for the Central Sahel region to meet the needs of vulnerable children and families with water, sanitation, and hygiene programs is only 22 percent funded.

“Imagine having to choose between buying bread or buying water for a hungry, thirsty child who is already sick, or between watching your child suffer from extreme thirst or letting them drink contaminated water that can cause killer diseases,” said Russell. “Families across drought-impacted regions are being forced into impossible choices. The only way to stop this crisis is for governments, donors, and the international community to step up funding to meet children’s most acute needs, and provide long-term flexible support to break the cycle of crisis.”