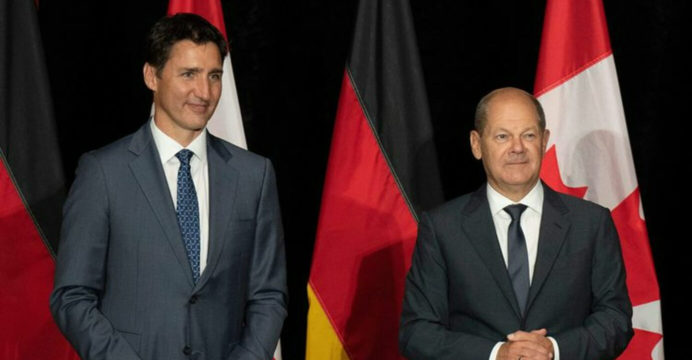 The leaders of Canada and Germany signed a green hydrogen deal on Tuesday, laying a path for a transatlantic supply chain as Europe seeks to lessen its dependence on Russian energy.

“It’s a vote of confidence for Canada as a leader in clean energy,” Prime Minister Justin Trudeau said during a joint press conference with visiting German Chancellor Olaf Scholz.

“We cannot as a world continue to rely on authoritarian countries that will weaponize energy policy, as Russia is, that don’t concern themselves with environmental outcomes or labor rights or even human rights,” Trudeau added.

Moscow has slashed its energy exports to Europe in response to punishing Western sanctions over Moscow’s invasion of Ukraine, forcing countries to scramble for alternatives, reports BSS.

Scholz said there was a need to discuss “short-term constraints and LNG (liquefied natural gas) but in the long run, the real potential lies in green hydrogen from the wind-rich, thinly populated Atlantic provinces.”

Canada aims to become a major producer and exporter of hydrogen and other related clean technologies to displace climate-warming fossil fuels, with Germany lined up to become a first customer.

In a joint declaration, Trudeau and Scholz outlined plans to “kickstart the hydrogen economy and to create a transatlantic supply chain for hydrogen.”

The plan is to make the first deliveries of Canadian hydrogen to Germany as early as 2025, the statement said.

Canada said it would also export hydrogen to the broader European market — “contributing to European energy security,” as the bloc looks to end its reliance on Russian energy — as well as to Asia.

The two leaders, with a sizeable German business delegation in tow, toured a site in Stephenville, Newfoundland, where US-based World Energy GH2 Inc. is looking to build a hydrogen production facility powered by a 164-turbine, one-gigawatt wind farm on the Port au Port Peninsula.

The former pulp mill boasts substantial wind resources, access to the power distribution grid and a port that can ship product to Europe.

The project is one of a dozen under consideration by the Newfoundland government since it lifted a moratorium on new wind farms, and in July issued a call for proposals to put turbines on government lands.

With an estimated $10 billion price tag, it would be the largest single investment ever made in Canada’s Atlantic region.