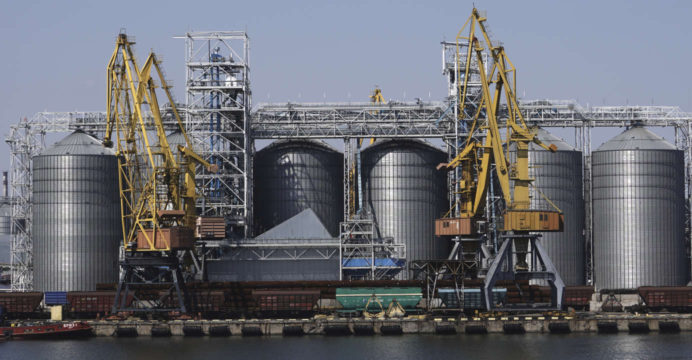 In a victory for global efforts to reduce food shortages, Ukraine is on track to transport almost as much grain this month as it did before the Russian invasion, a US official said Tuesday.

Before the war, Ukraine exported five million metric tons of grain every month, ranking among the top exporters of wheat, corn, barley, and sunflower oil in the world.

After the invasion on February 24, its shipments slowed to a trickle, which contributed to a rise in global food costs that has particularly hurt developing countries.

“Thanks to intensive international cooperation, Ukraine is on track to export as much as four million metric tons of agricultural products in August,” a senior US State Department official told AFP.

Through the intercession of Turkey and UN Secretary-General Antonio Guterres, Ukraine and Russia came to a first wartime agreement in July that included guarantees for ships to leave Ukrainian Black Sea ports.

According to the State Department official, over the previous few weeks, the measures have helped remove 33 ships carrying more than 720,000 tons of grain from the ports.

The European attempt to transport Ukrainian grain by river, rail, and road channels has so far proved more significant.

With the help of the so-called “Solidarity Lanes” set up by the European Union, more trucks and other vehicles were able to cross the border quickly, overcoming obstacles like Ukrainian wagons that were incompatible with European rail gauges.

Each month, according to the official, the European endeavor exports 2.5–3 million tons of produce to the European Union and other worldwide markets.

Russia will also be guaranteed the shipping of food and fertilizer without being subject to penalties as part of the accord struck in Istanbul.

In a recent call for “unrestricted access,” Guterres warned that if Russian fertilizer cannot reach global markets, the world may experience serious food shortages in 2019.

The United States claims that agricultural supplies are not subject to its broad sanctions against Russia related to the conflict in the Ukraine and accuses Moscow of trying to divert attention away from its own role in the shortages.

The World Food Programme will use the additional $68 million from the United States, which was announced last week, to purchase 150,000 metric tons of Ukrainian wheat to combat food insecurity.

In countries in the Horn of Africa, where the rising expense of imported food has compounded the effects of climate change, the UN agency said on Friday that some 22 million people face hunger.

Four consecutive rainy seasons have been a historic failure for Kenya, Ethiopia, and Somalia.