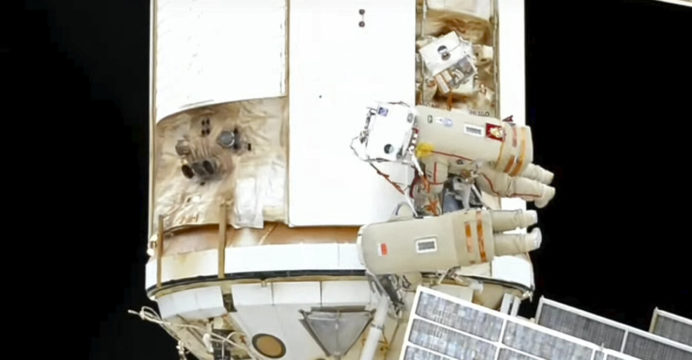 A spacewalk by two Russians on Wednesday was ended abruptly due to a problem with the battery in cosmonaut Oleg Artemyev’s suit, though at no point was he in any danger, the US and Russian space agencies said.

“Oleg, you must return to the airlock as soon as possible,” the Earth-based Russian mission controllers ordered more than two hours into his trip outside the International Space Station (ISS), reports BSS.

“Drop everything and go back,” he was told multiple times, according to a live English translation broadcast by NASA.

“Please do not worry, everything is fine. You are OK,” the controllers said.

“Me? Worry? No way,” responded 51-year-old Artemyev, who took over the commander position of the ISS in May from American astronaut Thomas Marshburn.

Artemyev made his way back into the airlock where he successfully reconnected to the ISS’s main power.

He then waited for the second cosmonaut, Denis Matveyev, to gather all the supplies they had used on their mission, reenter and pressurize the airlock.

The spacewalk was declared finished after about four hours.
“The situation is under control… The health of the cosmonaut is not in danger,” Roscomos in a statement afterward.

“The crew is doing well,” the Russian space agency added, noting that any uncompleted work will be finished later on.

Before the battery issue, the two cosmonauts installed two cameras outside the ISS.

“The duo was never in any danger during the operations,” NASA said in blogpost.

Wednesday’s mission was the seventh spacewalk for Artemyev and the third for Matveyev.