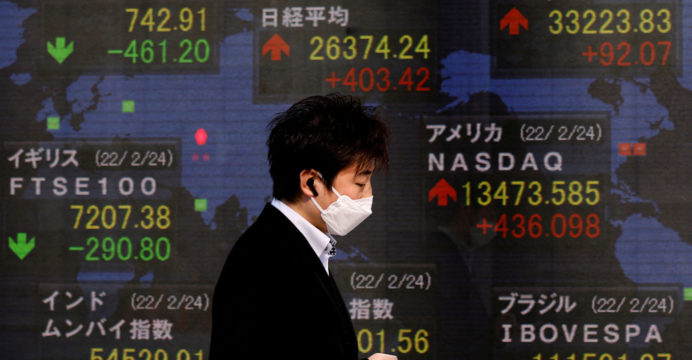 While policymakers said they would eventually have to start tempering their tightening pace, they said they would keep borrowing costs elevated “for some time,” though admitted there was a risk of going too far and damaging the economy, reports BSS.

The minutes dampened hopes that after a period of quick, sharp increases this year, the bank could possibly begin lowering them in 2023 once inflation was coming down.

Bets on a more dovish approach in the new year had been boosted by data showing inflation came down quicker in July than expected. That helped drive a rally in equities from their June lows and weighed on the dollar.

However, the realisation that policy would likely stay restrictive undermined the sense of optimism, pushing all three indexes on Wall Street down Wednesday for the first time in four days with the tech-heavy Nasdaq taking the biggest hit.

And news that UK inflation spiked above 10 percent for the first time since 1982 added to the downbeat mood.

In Asia, traders appeared increasingly worried that the Fed will slip up as it tries to bring down inflation without causing another recession in the world’s biggest economy.

“While the… minutes continue to emphasise the need to contain inflation, there is also an emerging concern the Fed could tighten more than necessary,” Christopher Low, of FHN Financial, said.

“There is an inkling of improvement on the supply side of the economy, there is a bit of hope in some product prices moderating, but there is still a great deal of concern about inflation and inflation expectations.”

JP Morgan Asset Management’s Meera Pandit told Bloomberg Television: “We do still anticipate there’s going to be a lot of interest-rate volatility in the back half of the year, especially once markets start to perhaps acknowledge the fact that we might not necessarily see cuts in 2023 that are being priced in.”

Sentiment was also dragged by continuing worries about China’s economy, with Goldman Sachs and Nomura slashing their growth outlooks again following another weak round of data and as the country reels from Covid-19 lockdowns.

The announcements came after Beijing on Monday cut interest rates in a surprise move, before Premier Li Keqiang called on six key provinces — accounting for about 40 percent of the economy — to bolster pro-growth policies.

But Nomura economists said that while officials will likely unveil further measures “rolling out a comprehensive stimulus package is of low probability in a year of government reshuffle, while the need for maintaining zero-Covid makes conventional stimulus measures much less effective”.