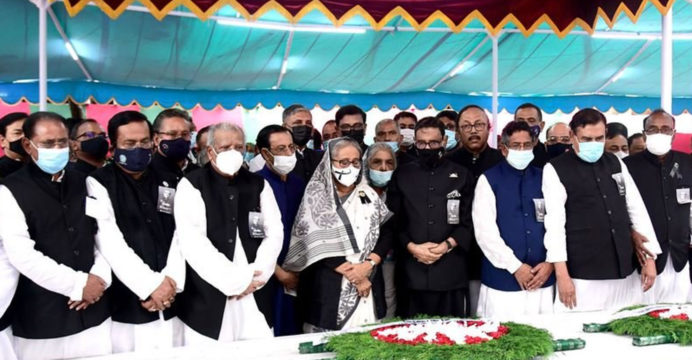 Leaders and activists from various socio-cultural and political organizations, including the Awami League, as well as individuals from all social strata, began assembling on the street in front of the Bangabandhu Bhaban here as of this morning to pay respects to the memory of Bangabandhu Sheikh Mujibur Rahman on the occasion of National Mourning Day and the 47th anniversary of his martyrdom.

This morning, a large crowd gathered to celebrate in front of the Bangabandhu Museum in the city’s Dhanmondi neighborhood.

This morning, the National Mourning Day ceremony got underway with a tribute at the painting of the nation’s founding father.

Prime Minister Sheikh Hasina first paid homage at the portrait of Bangabandhu at 6:30 am. Members of a smartly turned-out contingent of the armed forces gave a guard of honor, the bugle played the last post. Then the Prime Minister offered fateha and took part in munajat.

Later, Sheikh Hasian as the party chief along with cabinet members and Awami League central leaders paid homage at the portrait of Bangabandhu. 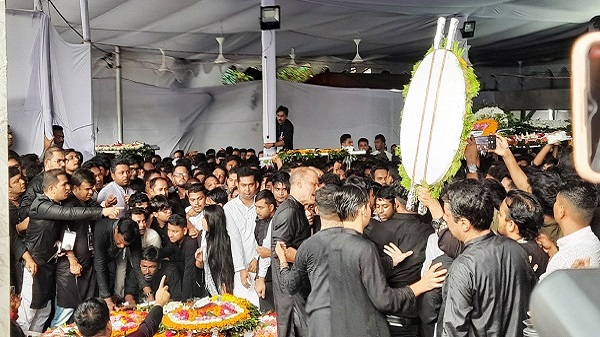 Sheikh Hasina visited his father’s memorials inside the ancient home at Dhanmondi 32 after paying respects. For thirty minutes, the prime minister remained there. The prime minister then paid respects at the Banani cemetery.

Males and females from all social classes, as well as students from various high schools and colleges, young children, and teenagers, gathered on the sidewalk at Dhanmondi Road No. 32 at 6:00 am this morning, with black badges on their chests and holding black banners in their hands.

By putting floral wreaths at the portrait of Bangabandhu Sheikh Mujibur Rahman, everyone present remembered the Father of the Nation and paid tribute to him. Today around 7 a.m., people of all races and creeds began congregating in front of Bangabandhu’s home.

The Bangabandhu Museum was kept open for the people after the Prime Minister left the place.

At 8:30 am, Prime Minister Sheikh Hasina laid floral tributes at the graves of the August 15 martyrs, among them her mother, brothers, and wives of his brothers, at Banani. The prime minister participated in munajat and offered fateha.

Cabinet members and party central leaders, among others, were presented during this time.