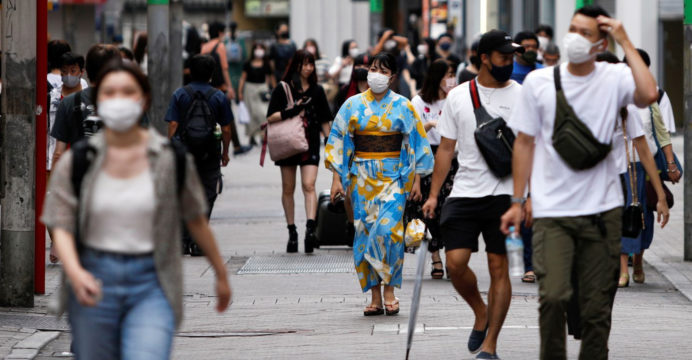 According to official data released on Monday, Japan’s GDP grew in the three months leading up to June after the government eliminated Covid-19 business restrictions.

Due to increased capital investment and greater consumer spending, the third-largest economy in the world had quarterly growth of 0.5 percent, which fell short of market estimates of 0.7 percent.

While the nation never issued harsh stay-at-home directives during the pandemic, viral limitations that mostly affected commercial opening hours were lifted by the government in March.

However, inbound tourism is still only available as part of group excursions, and the economy is struggling due to the energy price issue and worries about a worldwide recession fueled by sharp inflation.

According to data issued by the Cabinet Office, private consumption increased by 1.1 percent from April to June as opposed to the 0.3 percent seen in the January-March quarter.

“After the government lifted a quasi-state of emergency in late March, consumption of services showed a relatively strong rebound, while capital investment returned to growth,” BNP Paribas said in a note issued before the GDP data.

The information is preliminary, and GDP numbers are frequently updated in subsequent months.

The Cabinet Office first stated in May that the GDP declined marginally in the first quarter of 2022, but this was later changed to zero percent on Monday. This indicates that after a slight rebound in the final quarter of 2021, no change was noticed.

Consumer prices are rising in Japan, although not at the blistering rate seen in the United States and many other major economies.

The Bank of Japan sees the price rises as temporary and is sticking to its long-held monetary easing policies in a bid to achieve stable growth, a decision that has caused the yen to plummet to 24-year lows against the dollar.

Supply chain disruption caused by Covid-19 lockdowns in China and sky-high energy costs due to the war in Ukraine have also created a challenging environment for growth.

“We now think the economy’s recovery is less impressive than we had expected at the end of last year, with an unexpected resurgence of Covid-19 infections at the beginning of this year and now,” Masamichi Adachi and Go Kurihara of UBS said in a statement ahead of the data release.

Japan is currently experiencing a record-breaking wave of Covid-19 infections. It has logged around 35,000 deaths from the disease overall, far lower than many other countries.