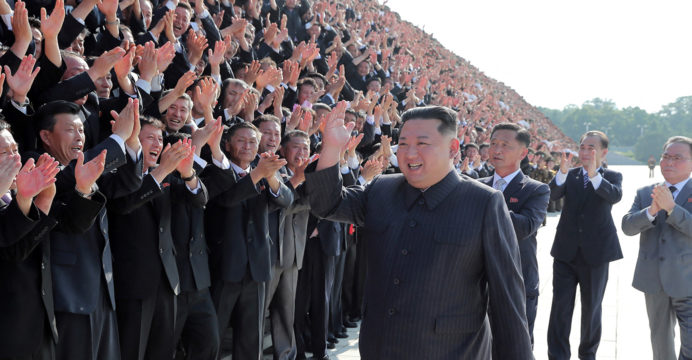 The declaration follows Pyongyang’s accusation of Seoul earlier this week for the Covid-19 outbreak in the North and threat to “wipe out” the South Korean government if necessary.

Virus restrictions were loosened after Pyongyang’s official Korea Central News Agency (KCNA) announced that “the public health catastrophe produced in the country was entirely defused and its whole territory was changed into a clean one free from the malignant virus in the shortest period.”

“The step for obligatory mask-wearing was lifted in all areas except frontline areas and borderline cities and counties, given that the whole country was turned into an epidemic-free zone,” KCNA said.

Just a few months after declaring its first cases in May, North Korea this week proclaimed a “shining victory” over Covid.

With the exception of border regions, social exclusion and other anti-virus measures were also suspended.

But masks were advised for those who had respiratory illness symptoms, and North Koreans were admonished to “stay watchful” against “strange things”—ostensibly referring to propaganda pamphlets from the South.

Despite a ban that took effect in 2021, South Korean activists for years have flown balloons carrying propaganda leaflets and dollars over the border, which the North has long protested against.

Kim Yo Jong, the powerful sister of Kim Jong Un, on Wednesday blamed these activities for the North’s Covid outbreak, vowing “deadly” retaliation against Seoul.

Kim Yo Jong also revealed that the top leader himself had fallen ill during the outbreak and suffered from a “high fever”.

North Korea has recorded nearly 4.8 million “fever” cases — while only identifying a fraction of those as Covid — since late April, with just 74 deaths, according to KCNA.

Experts, including the World Health Organization, have long questioned Pyongyang’s Covid statistics and claims to have brought the outbreak under control.

According to analysts, North Korea has one of the poorest healthcare systems in the world, with few intensive care units and poorly furnished hospitals.

Despite perhaps receiving some vaccines from China, it is not thought to have immunized any of its 26 million inhabitants, according to the Seoul-based specialized website NK News.