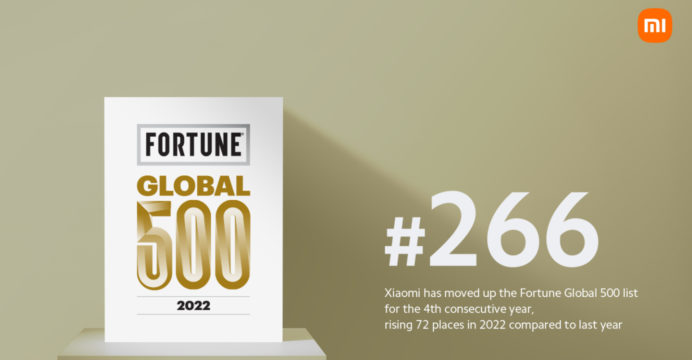 Xiaomi Group ranked No. 266 on the 2022 Fortune Global 500 list announced. The global technology company, which is the world’s third-largest smartphone manufacturer, moved up the list for the fourth year in a row.

According to Fortune Magazine, Xiaomi, which first entered the Fortune Global 500 List in 2019, has advanced more than 200 positions in four years, making it the fastest-rising Chinese technology company.

Xiaomi’s AIoT products also expanded rapidly, building a rich product ecosystem around smartphones. According to Canalys, Xiaomi ranked third in the global smartphone industry with a market share of 14.1% in 2021. Its smartphone sales ranked first in 14 markets and was in the top five in 62 markets. As of December 31, 2021, more than 434 million smart devices were connected to its platform (excluding smartphones, tablets and laptops), a year-on-year increase of 33.6%. The number of its global MIUI monthly active users reached 509 million, a year-on-year increase of 28.4%.

In 2021, the share of Xiaomi’s high-end smartphone shipments increased to about 13% of its total smartphone shipments, nearly doubling from the previous year. Meanwhile, Xiaomi has continued to increase its investment in research. In 2021, Xiaomi’s R&D expenditure was RMB 13.2 billion, a year-on-year increase of 42.3%. In the next five years, Xiaomi’s investment in research is expected to exceed RMB 100 billion. As of March 31, 2022, Xiaomi has been granted more than 26,000 patents; its global patent applications exceeded 53,000.