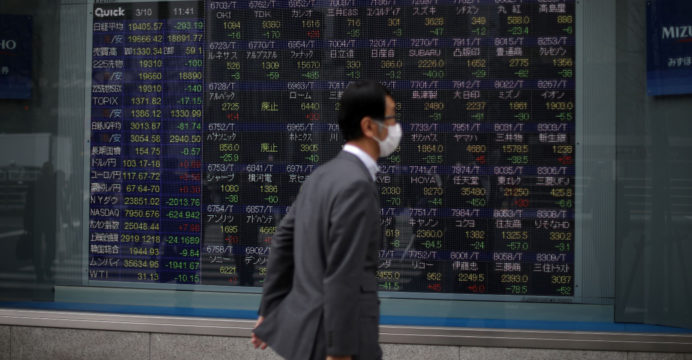 Stocks rose in Asia on Monday following a rally on Wall Street in response to data indicating US consumers remained resilient to surging inflation and higher interest rates, easing concerns about a possible recession.

Still, investors continue to fret over the economic outlook with Russia’s war in Ukraine showing no sign of ending, China locks down cities to fight a new Covid flare-up and central banks quickly tighten monetary policy.

While a strong set of economic data has of late boosted bets on the Federal Reserve lifting borrowing costs more, the latest figures were not seen as being big enough to warrant a sharper rate hike next week.

Market analysts widely expect the bank to announce a 75 basis point lift, though some have suggested a one percentage point increase could be on the cards.

Policymakers have made it clear their main goal is bringing inflation down from a four decade high, even if that stunts growth or even causes a recession.

“Overall the robust US data… eased concerns about an imminent recession but is also unlikely to mount an additional case for a 100 basis point Fed hike,” said SPI Asset Management’s Stephen Innes.

“And it was about as goldilocks of a mix of headline data risk as one could have expected given the Fed’s dilemma of balancing inflation versus growth.”

In early trade, Hong Kong, Shanghai, Sydney, Seoul, Singapore, Taipei, Jakarta and Wellington were all up. Tokyo was closed for a holiday.

However, uncertainty remains rife on trading floors, with a new spike in Covid cases in China causing concern that officials will impose fresh lockdowns in major cities including Shanghai and Beijing.

Lanzhou, the capital of northwestern Gansu province, has ordered its 4.4 million residents to stay home, while a county in Anhui province went into lockdown from Friday.

Beihai in the southern Guangxi region on Saturday also announced lockdowns in parts of two districts that are home to more than 800,000 people.

The expected blow to demand from the world’s top crude importer has weighed on prices of the commodity, with both main contracts giving up most of the gains seen after Russia’s invasion of Ukraine.

Adding to downward pressure on oil is speculation Saudi Arabia will lift production after Biden’s visit, during which he called on the kingdom to help ease the price pressure that has sent inflation rocketing.

SPI’s Innes added that with a deal between OPEC and other major producers ending soon, output could see a big rise.

“As long as the agreement is in effect, Saudi Arabia has made it transparent that individual producers with spare capacity should not exceed their quota to offset underproduction elsewhere within the group.

“From October, however, this changes.”

Meanwhile, Libya is set to see a boost to output as months of outages come to an end, while the lifting of US sanctions on Venezuela could lead to a return of capacity from the South American country.