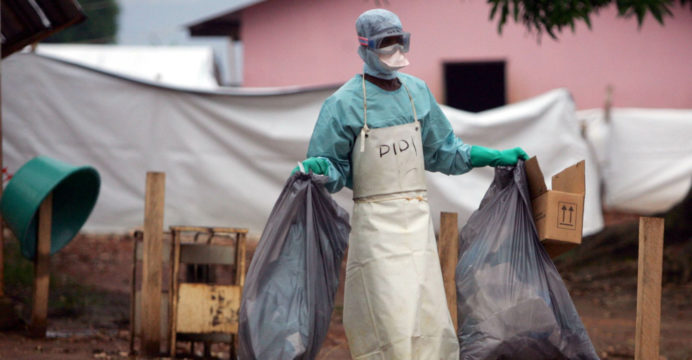 Ghana has confirmed its first two cases of the deadly Marburg virus, a highly infectious disease in the same family as the virus that causes Ebola.

It says both patients died recently in hospital in the southern Ashanti region. Their samples came back positive earlier this month and have now been verified by a laboratory in Senegal.

Health officials in the West African nation say 98 people are now under quarantine as suspected contact cases. These include relatives, medics and mortuary workers who came into contact with the two patients, reports BBC.

This is the second time that Marburg has been identified in West Africa. There was one confirmed case in Guinea last year, but that outbreak was declared over in September, five weeks after the case was discovered.

The World Health Organization (WHO), which is supporting Ghana’s health authorities, has praised the country’s swift response.

“This is good because without immediate and decisive action, Marburg can easily get out of hand,” said Dr Matshidiso Moeti, the WHO’s Africa director.

“There’s a whole multi-disciplinary team in the field trying to ensure that we are able to unearth the real source of this,” Dr Patrick Kumah-Aboagye, the head of Ghana’s health service told BBC Focus on Africa radio.

Teams are also going into communities to make them aware of the symptoms and to ensure they alert health authorities if any suspected cases emerge.

No treatment yet exists for Marburg – but doctors say drinking plenty of water and treating specific symptoms improves a patient’s chances of survival.

The virus is transmitted to people from fruit bats and spreads between humans through the transmission of bodily fluids.

Those at highest risk of getting infected include family members and hospital staff caring for someone who is sick.

It is a severe, often fatal illness with symptoms including headache, fever, muscle pains, vomiting blood and bleeding.

Ghanaian officials are warning people to keep away from caves and to thoroughly cook all meat products before eating them.

Beyond West Africa, previous outbreaks and sporadic cases have been reported in Angola, the Democratic Republic of the Congo, Kenya, South Africa and Uganda, the WHO says.

The virus killed more than 200 people in Angola in 2005, the deadliest outbreak on record according to the global health body. The first ever Marburg outbreak was in Germany in 1967 where seven people died.