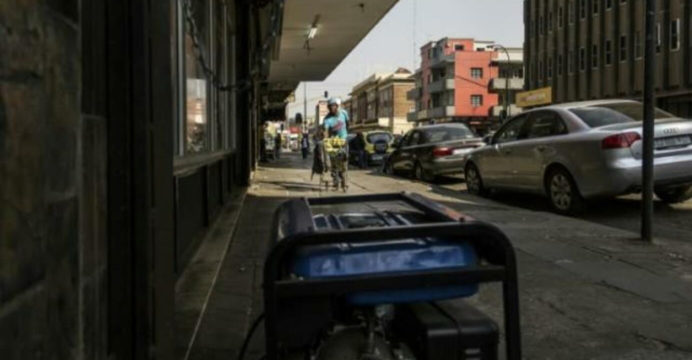 South Africans’ annoyance at power cuts has given way to worry, with business owners complaining that the prolonged energy crisis for which no end is in sight is eating into profits and hobbling economic activity.

At Native Rebels, a colourful second-floor bar flanked with a large balcony in the Johannesburg township of Soweto, the cost of running a generator to keep lights on for weeks has been a huge burden, co-owner Masechaba Nonyane told AFP, reports BSS.

“We thought Covid was bad… now that has been replaced with eight hours of no power,” the 33-year-old entrepreneur said.

This month, the country has endured almost two weeks of stage-6 load shedding, which entails multiple power cuts a day, each lasting between two and four hours.

Each of the up to eight stages of load shedding costs the country’s economy an additional R500 million (US$29 million) a day in lost activity, according to government estimates.

The crisis was exacerbated by a labour dispute at monopoly power provider Eskom’s coal plants.

The dispute was resolved earlier this month as Eskom agreed to a pay raise for its striking workers — but power cuts have yet to significantly abate.

“Load shedding will lead to further job losses, which will lead to lower production. It will affect spending. It will further affect economic growth,” said Ismail Fasanya, senior lecturer of economics at the University of the Witwatersrand.

Firms have had to spend money on generators, raising the cost of running a business — something that risks dissuading local entrepreneurs looking to start new ventures as well as foreign investors, said Fasanya.

The impact on jobs is particularly worrying in a country grappling with 34.5 percent unemployment in the wake of the coronavirus pandemic, he said.

Addressing the South African Communist Party congress on Friday, President Cyril Ramaphosa, who has been under pressure to resolve the issue, said he would soon be announcing measures to tackle the crisis.

While details remain unclear, the president said one solution might entail setting up other state-owned power utility firms to compete with Eskom, which currently generates more than 90 percent of the country’s energy.

“We have to use every available means and remove every regulatory obstacle to bring extra electricity onto the grid as soon as possible,” Ramaphosa said.

Energy experts and even debt-ridden Eskom have called for rapid government investment in renewables, particularly solar, as the best option to quickly boost energy production.

“That will go a long way for (supporting) small businesses and reducing job loss,” Fasanya said.

In May, Energy Minister Gwede Mantashe told parliament that while renewables are slated for procurement, gas, coal and nuclear projects are also in the pipeline.

Whether those measures come fast enough to keep businesses from closing their doors remains to be seen.

“I’m very worried about how we’re going to survive, I’m worried for people’s jobs, how many people we can save,” she said.

“If people are not working and they are not getting an income, you’re in a lot of trouble as a country.”