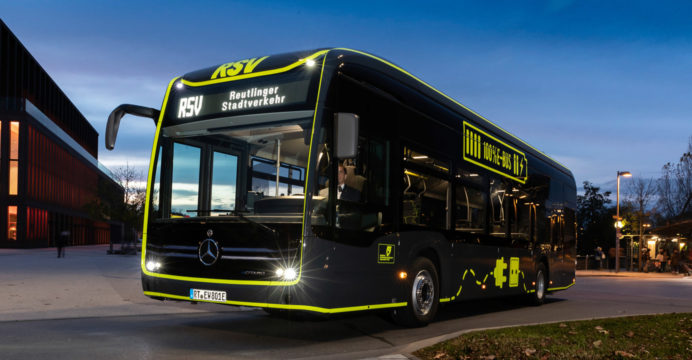 German manufacturer Daimler Truck Holding AG is set to start the assembly of its first Mercedes-Benz electric bus in Brazil between November and December as demand grows in Latin America’s largest economy, an executive said on Wednesday.

The company sees demand for electric buses in Brazil reaching 3,000 vehicles by 2024, its Bus Sales & Marketing Director Walter Barbosa said in a press conference, from just over 1,000 buses in 2023, reports Reuters.

The Mercedes-Benz brand is expected to join China-based BYD Co Ltd and some local importers in the Brazilian market.

Most of the vehicles would be operated in Sao Paulo as the city aims to own 2,600 electric buses by 2024.

Mercedes-Benz’s 84-passenger electric bus is called EO500U and has a 250-kilometer range, Barbosa said, noting that 100 million reais ($18.62 million) were invested in the project.

The vehicle will be equipped with two engines, with recharge taking between 2.5 and 3 hours. Daimler Truck did not reveal how much the electric bus would cost, but said prices are expected to be 3 to 3.5 times higher than those of a conventional diesel-fueled bus.

Considering the overall bus market in Brazil, the company said total sales are seen reaching 17,000 to 21,000 units this year, depending on how companies manage an ongoing auto parts shortage.

In 2021, bus sales totaled 14,000 in Brazil, almost the same level as in the year before, according to automakers association Anfavea.

“Last year was tough, with few customers able and willing to buy. This year is completely different, customers want to buy,” Barbosa said.