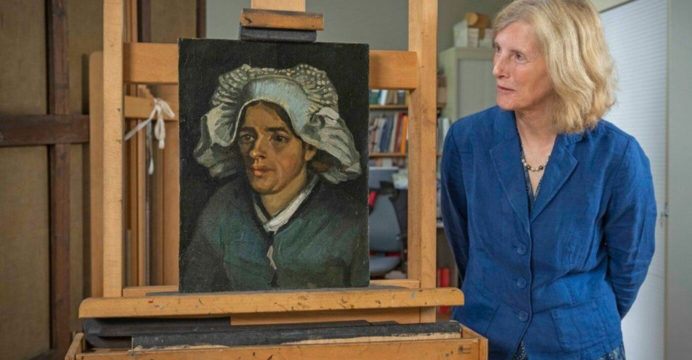 A previously unknown self-portrait by Vincent Van Gogh has been discovered hidden on the back of another painting. Experts at the National Galleries of Scotland made the find when the canvas was X-rayed before an exhibition.

The hidden self-portrait was covered by layers of glue and cardboard on the back of an earlier work called Head of a Peasant Woman, reports BBC.

The gallery’s senior conservator Lesley Stevenson said she felt “shock” to find the artist “looking out at us”.

She said: “When we saw the X-ray for the first time, of course we were hugely excited.

“This is a significant discovery because it adds to what we already know about Van Gogh’s life.”

His work did not sell during his lifetime and his fame came only after his death in 1890, at the age of 37.

Van Gogh became one of the most famous and influential figures in Western art history.

Head of a Peasant Woman entered the National Gallery of Scotland (NGS) collection in 1960, as part of a gift from a prominent Edinburgh lawyer.

It shows a local woman from the town of Nuenen in the south of the Netherlands, where the artist lived from December 1883 to November 1885.

It is thought that Van Gogh later painted the self-portrait on the other side at a key moment in his career, after he moved to Paris and was exposed to the work of the French impressionists.

About 15 years after his death, Head of a Peasant Woman was loaned to an exhibition at the Stedelijk Museum, Amsterdam.

It is believed that this is when the canvas was stuck down on cardboard before being framed. It appears that Peasant Woman was considered more “finished” than the self-portrait on the other side.

The painting changed hands several times and in 1923 was acquired by Evelyn St Croix Fleming, whose son, Ian, became the creator of James Bond.

It was not until 1951 that it came to Scotland, having entered the collection of Alexander and Rosalind Maitland, who later donated it to the NGS.

Experts at the gallery said it may be possible to uncover the hidden self-portrait, but that the process of removing the glue and cardboard will require delicate conservation work.

Research is ongoing to work out how that can be done without harming Head of a Peasant Woman.

However, visitors to an exhibition in Edinburgh will be able to see the X-ray image for the first time through a specially-crafted lightbox.

It shows a bearded sitter in a brimmed hat with a neckerchief loosely tied at the throat. He fixes the viewer with an intense stare, the right side of his face in shadow and his left ear clearly visible.

Prof Frances Fowle, senior curator of French Art at the National Galleries of Scotland, described the discovery as “an incredible gift for Scotland”.

She said: “Moments like this are incredibly rare. We have discovered an unknown work by Vincent Van Gogh, one of the most important and popular artists in the world.”

Several such self-portraits and other works have previously been found painted on the back of earlier canvases from the Nuenen period.