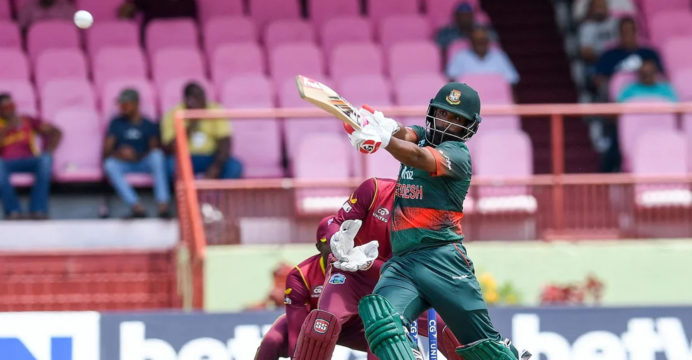 Bangladesh beat the Caribbean to win the ODI series

The West Indies are unable to travel to Bangladesh in their preferred format despite losing the Test and T20 series. The Tigers similarly embarrassed the Caribbeans in the second ODI after the first ODI.

The hosts in Guyana were bowled out for their second-lowest run against Bangladesh after being unable to locate the ball. Tamim Iqbal’s squad won by nine wickets to win the series. The Tigers’ goal of taking the series by ten wickets, nevertheless, remained unattainable.

At the Providence Stadium in Guyana, Bangladeshi captain Tamim Iqbal chose to put the West Indies in to bat after winning the toss. Mehdi Miraj and Nasum Ahmed only needed 108 runs to bowl out the Caribbean. Similar to the previous ODI, the hosts’ batting performance in the second ODI was disastrous because of the Bangladeshi bowlers.

Bangladesh spinners Miraj and Nasum did the job of destroying the Caribbeans. Miraj took four wickets and Nasum three. Besides, Shariful and Mosaddeq took one wicket each. The rest is a runout.

In response, the Tigers’ opening pair scored 48 runs in just 12 overs. Nazmul Shanto got off to a good start in the second consecutive match but could not capitalize on it. The left-hander became a victim of Gudakesh Moti by scoring 20 runs off 36 balls.

After Shanto left, Liton entered the crease and immediately began to move quickly. The Tigers moved forward with the goal of winning early with his aggressive batting. Bangladesh only needed 20.4 overs to score the necessary runs to win. Tamim Iqbal, the captain, hit four to secure the team’s triumph and a personal half-century. This quick opener has now reached fifty-three in 53 ODIs. He leads the team with the highest total of 50 runs. When batting aggressively, Liton scored 32 runs off of 27 balls.