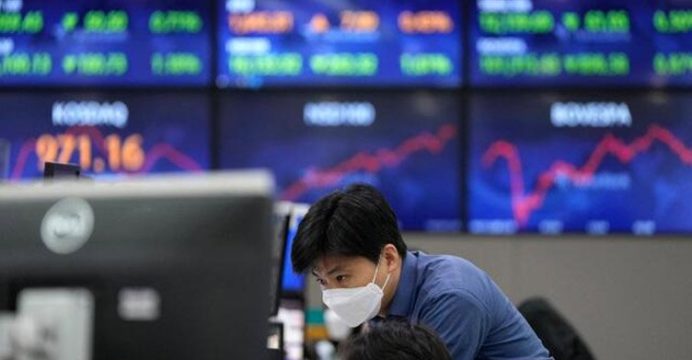 Asian markets saw a much-needed bounce Wednesday as Hong Kong’s tech giants led a rally in the city after their recent rout, while oil prices rose back above $100 but remain pressured by concerns over demand from China.

However, while the gains are keenly welcomed, further volatility is expected as Russia presses ahead with its war in Ukraine and the Federal Reserve starts its campaign of interest rate hikes to fight inflation, reports BSS.

Trading screens were swathed in red of late as investors fretted over the war in eastern Europe, the spike in prices and a Covid outbreak across China that has led to the lockdown of several cities including the key tech hub of Shenzhen.

Hong Kong was the worst-hit, with around 10 percent scythed off the Hang Seng Index in three days as tech titans such as Alibaba, JD.com and Tencent were tossed out by panicked dealers.

The sector has been battered owing to concerns about regulatory crackdowns by Beijing as well as US authorities, while there were also growing worries about possible US sanctions if China were to help Russia in its war with Ukraine.

News that the southern Chinese tech hub of Shenzhen had been put into lockdown to fight a Covid outbreak compounded the crisis.

However, Hong Kong clawed back some of its losses Wednesday, rising more than three percent at one point, thanks to a more than six percent advance in the Hang Seng Tech Index.

And the rest of Asia joined in, tracking a dip-buying rally on Wall Street.

Tokyo and Singapore piled on more than one percent, while Shanghai, Sydney, Seoul, Wellington, Taipei, and Jakarta were also up.

Sentiment has been given some support by a sharp drop in oil prices, just a week after they hit 14-year highs and ramped up fears over already elevated inflation.

Both main contracts fell below $100 Tuesday as lockdowns in several big Chinese cities led to fears about the economy and demand in the world’s biggest importer of the commodity.

Hopes for the Iran nuclear deal — which could see Tehran restart global exports of oil — have helped weigh on prices, as have signs that Russia-Ukraine ceasefire talks are slowly progressing.

However, crude enjoyed some fresh buying sentiment Wednesday, with Brent back into triple figures with expectations that sanctions on Russia will mean supplies remain tight even if the war is brought to an end soon.

The spike in crude as well as other commodities including wheat and metals has caused a headache for central banks as they try to move away from pandemic-era monetary policy and try to rein in inflation.

And the Federal Reserve’s meeting, which concludes later Wednesday, is in focus as it prepares for what is expected to be a series of hikes this year.

While the increase has been accounted for by investors, they will be keeping a close watch on what bank boss Jerome Powell says afterwards, in light of the Ukraine war and a possible slowdown in economic growth.

Meanwhile, data shows US consumer prices are rising at their fastest pace in 40 years.

“The confluence of events leading in to this meeting puts policy makers in a very unenviable position,” Matt Rowe, at Nomura Securities International, told Bloomberg Television.

“It’s being publicly debated whether if you create a recession to push the number down to two percent, is that actually a policy error?” he added, referring to inflation.