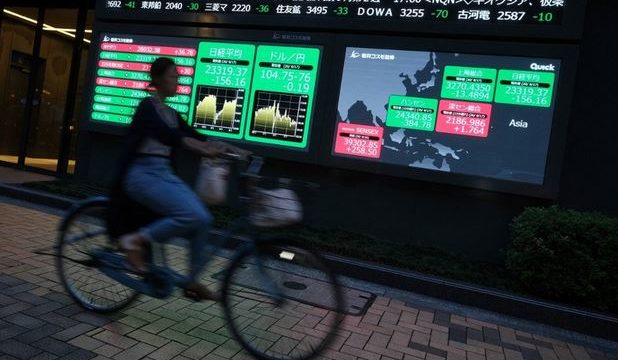 Asian markets sank Friday as traders resumed their Ukraine-fuelled selling after the previous day’s bounce, with data showing US inflation at a 40-year high adding pressure on the Federal Reserve to ramp up interest rates.

Bets on a more aggressive approach by the Federal Reserve to rein in runaway prices added to nervousness on trading floors, while the failure of high-level talks between Moscow and Kyiv to de-escalate the war also helped torpedo a brief rebound in equities.

However, oil struggled to regain the 14-year highs touched this week as governments embark on a diplomatic push to replace the output erased by strict sanctions and an embargo on Russian exports.

While the war in eastern Europe continues to rage, investor focus turned to the release on Thursday of figures showing US inflation hit 7.9 percent in February, the highest since January 1982.

The reading comes just ahead of the Fed’s next policy meeting, where it is expected to announce the first of what could be up to seven interest rate hikes this year.

While a phase of tightening is certain, speculation has been rife about how many and how steep the rises will be.

The war has provided officials an extra headache as the surge in oil markets will add upward pressure to consumer prices, though the bank must tread a fine line between fighting inflation and trying to prevent a recession.

“The headline print was a 40-year high, reflecting higher gasoline, food and shelter costs. And now with energy prices on the rise following Russia’s invasion of Ukraine and sanctions, expectations are for inflation to rise even more,” said National Australia Bank’s Rodrigo Catril.

The “net takeaway is that US inflationary pressures are proving to be more persistent and expansive, increasing the pressure on the Fed to lift the funds rate and cool the economy”.

Also Thursday the European Central Bank hiked its inflation forecast for the year and slashed its economic growth outlook while taking a more hawkish stance on policy.

The prospect of higher US borrowing costs has spurred a rally in the dollar, which at one point hit a more than five-year high of 116.38 yen, despite the Japanese unit usually outperforming in times of crisis owing to its value as a safe haven.

All three US indexes ended in the red, having enjoyed a strong burst higher the day before and Asia followed suit after its own advance on Thursday.

Hong Kong shed more than three percent and Tokyo more than two percent, while Shanghai, Seoul, Sydney and Manila gave up more than one percent.

There were also losses in Singapore, Taipei, Manila, Jakarta and Wellington.

“Despite markets suffering their worst start in memory, they do feel like they’re trading in an orderly, albeit volatile, manner with support and tentative buying at cheaper levels,” he said in a commentary.

“Any positive rumours or announcement is met with enthusiasm and FOMO (Fear of Missing Out) and buy the dip have been such good performers as investment strategies through the previous crises.

“Occasionally, however, we do get reminded of the prospects of military escalation, stagflation, supply chain disruption, sanctions, energy blockades etc and we move lower still. What is clear is there is little consensus or conviction on which direction we go next.”

Oil prices have been a key driver of the extreme volatility in markets since the invasion, with Brent stuck below $110 days after touching a 14-year high of $139 on Monday after the US said it would embargo Russian crude.

The black gold is down around eight percent on the week, with moves to find other sources of energy keeping the market tamped down. However, observers warn prices could rocket again and some have forecast an eye-watering $250 a barrel at some point.

“It’s been a rollercoaster ride for oil this week, and for some, the weekend cannot come quick enough,” said Stephen Innes Managing Partner at SPI Asset Management.

“There is still an abundance of chatter under the surface that diplomatic efforts will prove successful in unlocking supply alternatives, with Saudi Arabia, UAE, Iran seemingly the most likely candidates.”

“Still, Russia remains the most significant risk for oil, and the prospect of lost production will keep a relatively high floor on oil prices.”