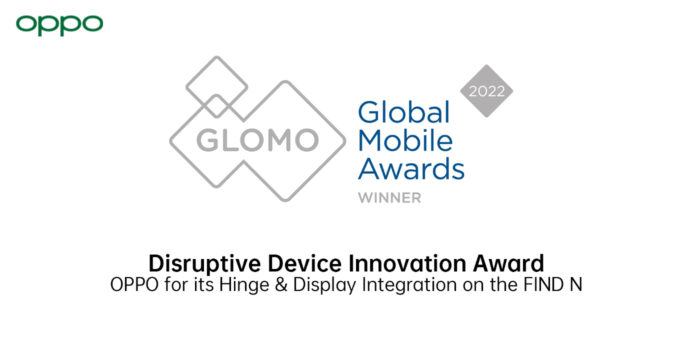 This week, OPPO was presented with the Disruptive Device Innovation Award at the 2022 Global Mobile (GLOMO) Awards at MWC22 Barcelona.

The Award, which recognises OPPO for its Hinge & Display Integration on Find N, was announced during a virtual ceremony co-hosted by Sasha Twining and Justin Springham from Mobile World Live and streamed to audiences around the globe via LinkedIn.

“We are extremely honored that Find N has received the Disruptive Device Innovation Award at this year’s GLOMOs. This is a huge recognition of OPPO’s products and technology not only from our peers in the industry but also end users themselves,” said Billy Zhang, Vice President of Overseas Sales and Service at OPPO.

“Following four years of R&D and six iterations, we are delighted to see that OPPO Find N is finally making foldable devices suitable for everyday people, rather than devices purely for tech enthusiasts. User experience has always been at the center of everything we do at OPPO, and it will continue to do so as we further explore how to deliver truly practical value to people through technological innovation.”

“The strict judging process makes the GLOMOs one of the most respected awards in the industry,” said Shaun Collins, GLOMOs Head Judge and Executive Chairman at CCS Insight. “The judges were particularly impressed by the innovations of OPPO’s foldable Find N. This execution of the technology by OPPO was praised by the judges for its durability and ease of use in a rapidly maturing sector of the market. The judges also noted that OPPO had delivered it in the most affordable large foldable phone on the market.”

The GLOMO Awards, chaired by Shaun Collins, Executive Chairman of CCS Insight, are adjudicated by over 200 independent industry experts, analysts, journalists, academics, mobile operator representatives, and CTOs; and are widely recognised as the most prestigious accolade in the mobile industry. The Disruptive Device Innovation category recognizes new technology products that make use of innovation in hardware and software to enhance performance and improve user experience. In winning the award, OPPO’s Find N was recognized for its distinct, self-developed hinge mechanism as well as its unique external design.

Released at the end of 2021, Find N is OPPO’s first flagship foldable smartphone. With its ergonomic design, Find N offers convenient use with a single hand, or a highly immersive, large screen experience when unfolded. To address problems associated with screen creases typically found on other foldable smartphones, OPPO introduced its own Flexion Hinge design to the device. The new hinge not only improves reliability and reduces the appearance of screen creases, but also enables the screen to freely stand at varying angles (between 50-120 degrees) of display. Over one million orders have been placed for Find N to date.

During MWC 2022, OPPO has showcased the depth and breadth of its achievements in technologies in areas such as 5G/6G, device form factor, imaging, flash charge, and AR. These include the launch of 150W SUPERVOOCTM flash charge, which doubles the lifespan of smartphone batteries, and 240W SUPERVOOCTM, which can fully charge a 4,500mAh battery in 9 minutes, as well as OPPO’s latest generation of 5G smart connective hubs, the OPPO 5G CPE T2.