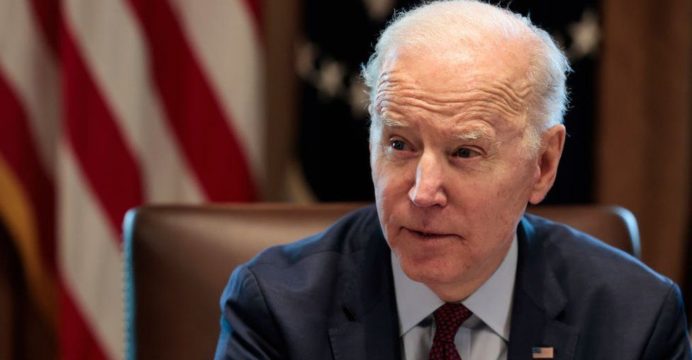 The US has announced fresh sanctions on Russian oligarchs – the latest attempt to squeeze President Vladimir Putin as his invasion of Ukraine continues.

The new penalties will target members of the Russian elite, their families and close associates, cutting them off from the US financial system, reports BBC.

“The goal is to maximise the impact on Putin,” US President Joe Biden said.

Dmitry Peskov, Mr Putin’s press secretary, is among those targeted in the latest blockade.

Mr Peskov, 54, is already sanctioned by the European Union, and now joins a list of eight oligarchs and nearly two dozen of their family members and associates whose assets in the US will be frozen, and have their American properties blocked from use.

Another 19 oligarchs – including Putin ally Alisher Burhanovich – and 47 of their family members will face US visa restrictions.

“These individuals have enriched themselves at the expense of the Russian people,” the White House said on Thursday. “We will continue to work with our allies and partners to hold accountable the Russian oligarchs and corrupt leaders who are profiting from this violent regime.”

Earlier this week, Mr Biden had promised to go after Russian oligarchs who have “bilked [stolen] billions of dollars off this violent regime” when speaking of the Ukraine crisis at his State of the Union address.

On Thursday, Mr Biden said the existing sanctions carried out with Western allies, such as blocking Moscow from the Swift international payments system and restrictions against the Russian central bank, were already having a “profound” impact.

“Our interest is maintaining the strongest unified economic impact campaign on Putin in all history and I think we’re well on the way to doing that,” he said.