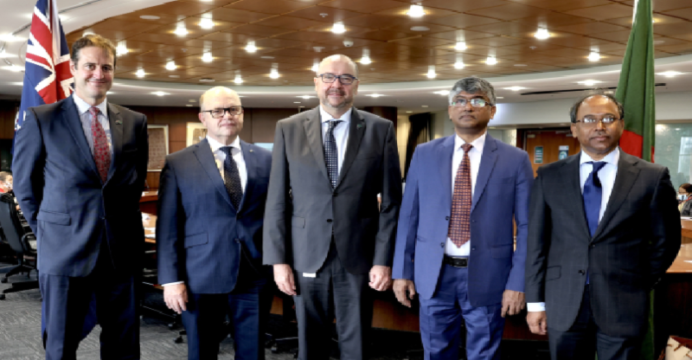 Australia has officially assured continuation of duty free and quota free treatment to Bangladesh exports even after graduation out of Least Delegation Country (LDC) in 2026.

The commitment came at the meeting of the first Joint Working Group (JWG) on trade and investment held on February 22 at Canberra, a foreign ministry press release said, reports BSS.

Formed under the Trade and Investment Framework Arrangement (TIFA) between Australia and Bangladesh, the JWG at its first meeting had productive discussions on general trade issues, trade in goods and services, trade facilitation, promotion of investment, energy and defence collaboration among others.

Australia agreed to initiate a study on prospects of greater trade and investment flow for adding dynamism in economic ties.

The two countries agreed to enhance industry connections between Australian exporters of raw materials like cotton, wool, hides and importers and manufacturers in Bangladesh.

They decided to explore options to engage with global value chains as well as third country markets and ‘buy back’ finished goods made from Australian inputs.

They would arrange consultations on LNG sales to Bangladesh including on innovative options around Bangladesh’s preferred govt-to-govt arrangement.

Australian investors were encouraged to invest in Bangladesh in particular in the infrastructure sectors.

Australia also agreed to support Bangladesh in capacity building and human resource development through cooperation on technical and vocation education.

The Australian Trade Minister sent a video message for the JWG meeting, where he said “Australia and Bangladesh are moving to a new level of partnership-one based on shared interests, values, people-to-people links and increasingly marked by the dynamism of the commercial ties”

The next JWG meeting will be held in Bangladesh early next year.