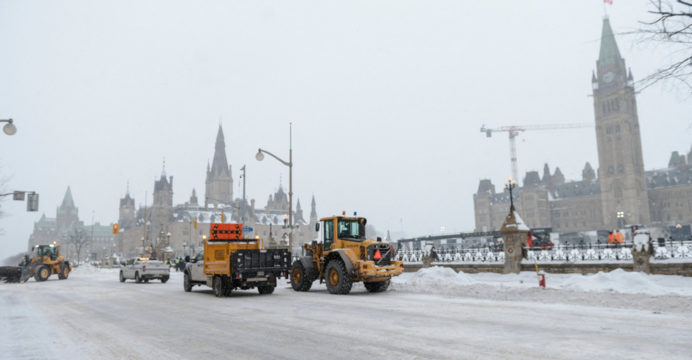 Following the end of the trucker siege, police recover the capital of Canada.

After a large police operation ended a drawn-out siege by protesters against Covid health guidelines, the last giant rigs were pulled out of Canada’s capital on Sunday, and the streets were peaceful for the first time in nearly a month.

A large clean-up operation was beginning in Ottawa’s icy downtown, where riot police had fought trucker-led protesters for two days, eventually pushing them out of their demonstration hub outside parliament.

“I’m very happy to have my city back,” Jeff Lindley, who lives and works downtown, told AFP. “It’s so much better today, calmer and quieter without the ominous presence of all the trucks and protesters.”

“Many of the unauthorized protestors are gone,” Ottawa interim police Chief Steve Bell said at a press conference.

“We’re not done with this operation yet,” he stressed, adding that authorities were on the lookout to make sure “nobody returns to occupy our streets again.” However, a bitter frost enveloped the city, and the last-ditch protest-turned-street-party failed.