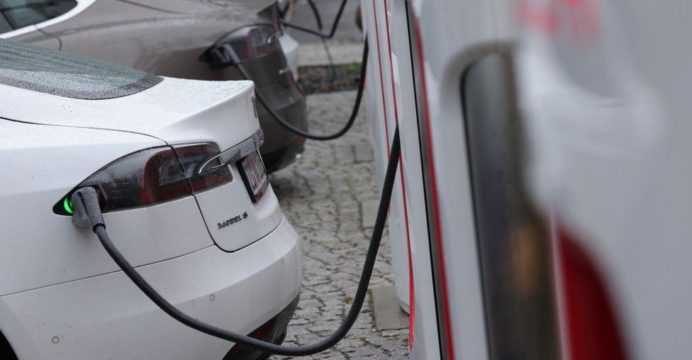 Sales of electric vehicles soared last year, but the market as a whole failed to recover from the Covid pandemic.

More electric cars were registered in 2021 than in the previous five years combined, according to the Society of Motor Manufacturers and Traders (SMMT).

Yet the industry body said much more investment is needed in charging infrastructure, reports BBC.

Meanwhile an acute shortage of computer chips left dealers struggling to get hold of many new conventional models.

Overall, 2021 was another dismal year for the motor industry. Preliminary figures from the SMMT show that some 1.65m cars new cars were registered.

That was a small increase over 2020, when the impact of the first Covid-related lockdowns and dealer closures sent sales plummeting.

But it was still the second-worst figure recorded in nearly three decades, and 28% down on its pre-pandemic level.

At the beginning of the year, there was a further lockdown, while any hopes of a lasting recovery later on were dashed by a severe shortage of semiconductors – or computer chips.

These are critical components in modern cars, being used in areas such as engine management and emissions control, emergency braking, airbags, entertainment systems and navigation.

But outbreaks of Covid-19 in regions where the chips are made, particularly in southeast Asia, caused factory closures that restricted supplies.

The motor industry also faced intense competition for the chips that were available from other sectors, particularly the consumer electronics industry.

This forced manufacturers to allocate what supplies they had to the most profitable models, as well as to those which helped them meet emissions targets – notably electric and plug-in hybrid cars.

In December, they accounted for one in every four cars sold, while the second-best selling car in the country during the year was Tesla’s electric Model 3.

This trend will be welcomed by the government, which plans to ban the sale of new petrol and diesel powered cars by 2030, to help meet commitments on climate change.

But the SMMT has warned that reductions in the value of the plug-in car grant could send out mixed messages to consumers.

In December, the maximum value of the grant, which is meant to bring down the cost of an electric car, was reduced from £2,500 to £1,500, and the number of eligible models was also narrowed down.

“It’s a massive ambition to get the entire market to move to meet net zero by 2030/2035. We would argue you need to use every lever at your disposal”.

“Anything that brings into doubt that commitment doesn’t help a consumer who might be wavering”.

The industry body said it is also concerned that while electric vehicle sales are rising rapidly, the number of on-street public charging points is not increasing as quickly.

“There will be more people competing for a much more slowly increasing number of on street chargers”, explained Mr Hawes.

“We want the user experience to be seamless, to be affordable and to be easy. And we just foresee this being one of the barriers to the consumer take-up of these vehicles that we need across the country.”

But Melanie Shufflebotham, co-founder of the Zap Map website, which lists charging points across the country, disagreed that the rollout of new infrastructure has been too slow.

“Electric vehicles are now the norm”, she said.

“Sales accelerated throughout 2021 and so did the public charging infrastructure. There are nearly 30,000 public chargers in the UK, an increase of more than a third since the end of 2020”.

“But we do need charging to keep growing at pace this year to make sure it is simple for the next generation of EV drivers”.