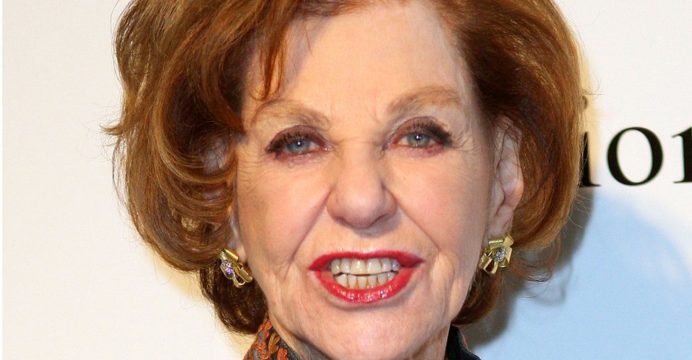 US actress Joan Copeland, who starred on Broadway and in TV shows like Law and Order, has died at the age of 99.

Her son Eric told The Hollywood Reporter that she died in her sleep in her New York apartment.

She appeared on stage in Detective Story and Pal Joey and on daytime soaps such as Love of Life and Search for Tomorrow.

The actress who was born as Joan Miller in New York took on the stage moniker Joan Copeland as she did not want to trade on her brother’s name.

She made her Broadway debut in Sundown beach in 1948, and returned there a dozen times in the decades that followed in productions like Detective Story, 45 Seconds from Broadway and The American Clock.

In the latter play about a family during The Great Depression, created by her famous older brother in 1980, Copeland portrayed her own mother – winning a Drama Desk Award for the role.

But she was perhaps best-known for her performances as the bored rich socialite Vera Simpson in the 1977 Broadway revival of Pal Joey.

Copeland was also Katharine Hepburn’s standby as Coco Channel for the musical Coco, which ran for more than 320 performances from 1969-70.

The actress once told The New York Times that “from the time I was a little girl I had the stage bug”.

“It was like a big dream, like kids who want to fly to the moon today,” she said. “Perhaps I was unconsciously influenced by my brother. He had made it. I was desperate to get out of the dreariness I was living in.”

From the stage to the small screen, she appeared on TV from the 1950s and played a number of prominent roles on long-running US daytime soap operas.

These included the villainess Andrea Whiting in Search for Tomorrow, from 1967 to 1972, Gwendolyn Lord Abbott In One Life to Live; and twin sisters Maggie and Kay Logan in Love of Life.

She went on to appear in The Edge of Night, How to Survive a Marriage and As the World Turns.

Copeland, however, noted how she had struggled to find TV and radio work earlier in her career due to her association with her brother, who was blacklisted in 1957 after being convicted of contempt of Congress for refusing to reveal the names of alleged Communist writers with whom he had attended meetings.

Later in her career, Miller’s sister spent a decade as Judge Rebecca Stein in the legal drama TV series Law & Order, between 1991 and 2001.

She was married to bacteriologist George Kupchik from 1943 until his death in 1989.