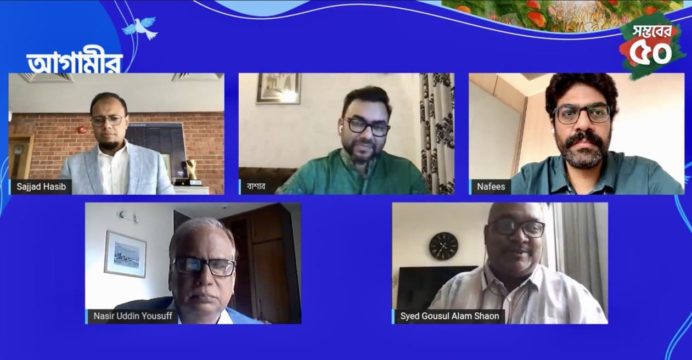 Grameenphone, the tech service leader and connectivity partner of Digital Bangladesh, has taken a time-befitting initiative titled ‘Agamir Chokhe Bangladesh.’ In order to treasure the heroic history of the Liberation War, Grameenphone has selected some of the unforgettable events that took place in the Liberation War on the occasion of the golden jubilee of our victory. And those events have been presented to the new generation in the form of animated cartoons which are suitable for children. These are available in the form of video contents on Grameenphone’s YouTube channel and Facebook page.

Through this initiative, Grameenphone remembers with great respect the sacrifice of the common people, including the heroic freedom fighters for the country’s independence in 1971. Grameenphone believes that this history of the Liberation War will give courage to the next generation, and the true events of the Bengali nation’s heroism and patriotism will intensify the love for the motherland among the new and future generations. Grameenphone considers it their responsibility to inform them about this.

The true events of the liberation war have been collected from the interviews of the heroic freedom fighters who participated in the liberation war and from the books, magazines, and periodicals published in the post-war period. And they have been read out by popular actors like Aupee Karim, Tariq Anam Khan, and Fazlur Rahman Babu. Heroic freedom fighter Nasiruddin Yousuff Bachchu was directly involved in this initiative. He said about this initiative, “It is a great initiative to introduce our liberation war to this generation. In front of the children, our history has been presented after tailoring it in their ways, in their language, which will help us to carry on our history from generation to generation.”

Sajjad Hasib, CMO of Grameenphone, said, “Our valiant freedom fighters have left an example of unprecedented courage. There are many learnings that are hidden in the history of our independence that will show our new generation the way to conquer the coming days. The future of Bangladesh is being developed based on the achievements of the last 50 years. This is our small endeavor to pass on the essence of victory to the next generation. We hope that through this initiative, the new generation will know, understand and learn about the history of our independence in their own ways. On this auspicious moment of golden jubilee, let this light of patriotism spread from generation to generation in the month of victory.”

As parents or guardians, it is the responsibility of all of us to introduce the history of Bangladesh to the next generation. So, let us tell our children the history of the Liberation War on this occasion of the Golden Jubilee of our victory. Grameenphone is working with the expectation that these incidents will spread the light of patriotism among generations.