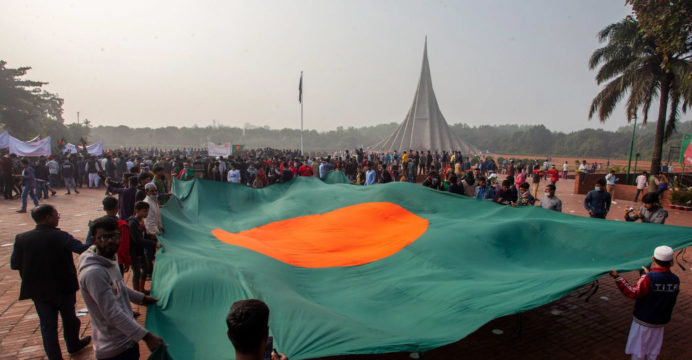 Bangladesh is commemorating the 50th anniversary of its victory over Pakistan

Even in the midst of a nine-month battle ignited by Bangabandhu Sheikh Mujibur Rahman’s declaration of independence against a determined foe, a people’s steadfast optimism of removing the chains of tyranny blazed the road forward.

Against all difficulties, the ultimate victory was achieved on December 16, 1971, when Pakistani occupation forces surrendered, paving the way for Bangladesh’s independence.

On Thursday, the country celebrates 50 years of victory against Pakistan in the Liberation War, with its sights fixed firmly on a bright future. And while the red and green flags fly triumphantly across Bangladesh and the world, they continue to serve as a symbol of the country’s determination to resist and oppose oppression in whatever form.

Bangabandhu, the country’s founder, personified and imparted this indomitable spirit. The historic victory’s golden jubilee falls on the same day as the centennial of the birth of the greatest Bengali to have ever lived.

President Abdul Hamid greeted his countrymen on the 50th Victory Day, urging them to work together to realize Bangabandhu’s ideal of a wealthy and self-sufficient Bangladesh.

“Let us use our individual roles to contribute more to the realization of the Liberation War’s goals and spirit in order to move the country and the nation ahead on the path of growth and prosperity.”

Prime Minister Sheikh Hasina, in a message to Bangladeshis, asked for the ideals of the country’s liberation struggle to be carried down from generation to generation.

“I firmly believe that if the current trend of our development continues, this country will become the hunger-free and prosperous ‘golden Bangladesh’ of Bangabandhu’s dream by 2041,” Hasina said, referring to the country’s progress over the last 50 years under the leadership of the Father of the Nation and his party, the Awami League.