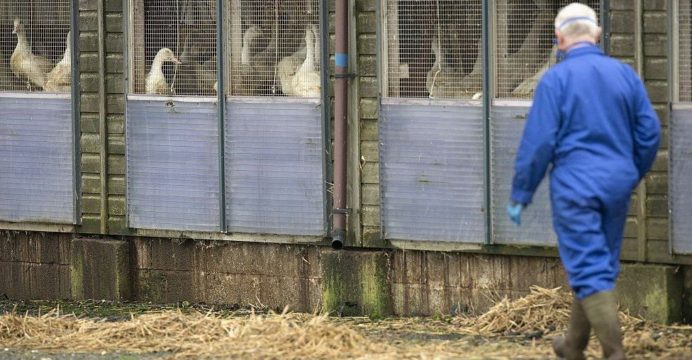 There is a “phenomenal level” of avian flu in the UK, chief veterinary officer said

The UK’s chief veterinary officer has told the BBC there is a “phenomenal level” of avian flu in the UK.

Tens of thousands of farmed birds have already been culled, as the” largest number of premises ever” in an avian influenza outbreak are infected, reports BBC.

Officials say the risk to human health is low – there is no link to the Covid-19 pandemic – but infected birds should not be touched.

“It has huge human, animal, and trade implications,” the chief vet said.

Lessons learned from the foot-and-mouth outbreak are being used to try to control the outbreak, Dr Christine Middlemiss added.

As of Wednesday there were 38 confirmed infected premises in the UK – 31 in England, three in Wales, two in Scotland, and two in Northern Ireland. The total last year was 26 confirmed cases.

The disease is largely spread by migratory wild birds which return to Britain and pass it on to other birds. Dr Middlemiss said the UK was only a few weeks into the migratory season, which normally goes on until March.

“We are going to need to keep up these levels of heightened biosecurity for all that time.”

An Avian Influenza Prevention Zone was declared across the UK on 3 November. It was extended on 29 November, requiring all bird owners to keep the animals indoors.

Dr Middlemiss said there was a high level of infection in wild birds returning from the north of Russia and the east of Europe, where they spent the summer.

The advice from the Department for Environment Food and Rural Affairs (Defra), is that the risk to human health from the avian flu A(H5N1) virus is “very low”. However, members of the public are strongly advised not to touch diseased birds.

The availability of eggs in supermarkets is unlikely to be affected, said Dr Middlemiss, because the number of farms affected is low compared to overall egg production.

“Whilst we’re happy that there are not going to be any food supply issues, because of the overall large number of chickens and eggs and things we produce, it is devastating for those individual companies involved. It’s also devastating for people who keep yard flocks.”