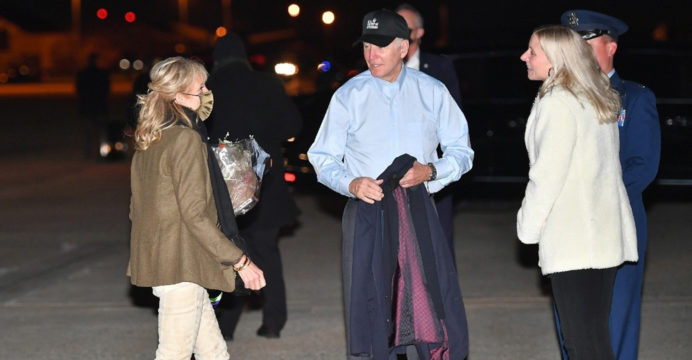 “Welcome back!” a woman shouted as President Joe Biden began his Thanksgiving break on luxury Nantucket island — celebrating his first chance to escape from weeks of bad news.

The woman yelling was one of a score of islanders braving a freezing night Tuesday to cheer Biden as his motorcade zipped from the airport through narrow lanes to the exclusive compound of billionaire family friend David Rubenstein.

Nantucket, a former whaling center out in the Atlantic off Massachusetts, is not a place where Biden has to worry about being harassed by Donald Trump supporters.

He is unlikely to confront QAnon conspiracy fantasists or people brandishing “Let’s Go Brandon” signs — the Republicans’ viral euphemism for “Fuck Joe Biden.” Such places are increasingly rare in a divided country.

“Nantucket is an escape from the real world,” said local resident Matthew Parker, 58.

Parker, who has owned the Seven Sea Street inn for more than three decades, was referring partly to the island’s geographical isolation and the back-in-time vibe of Quaker architecture and cobbled roads.