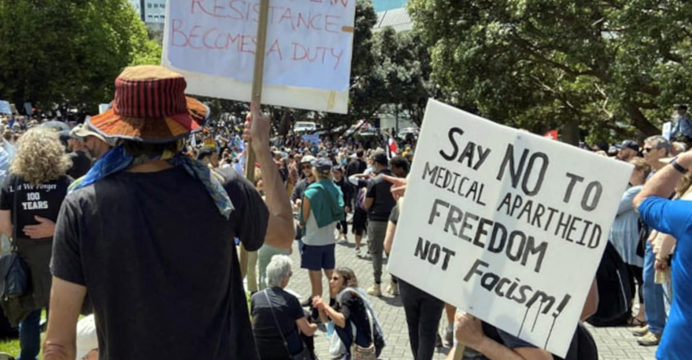 Thousands of people marched to the New Zealand parliament on Tuesday to protest the Covid-19 limitations, prompting a large police presence at the Beehive in Wellington.

Approximately 3,000 individuals marched through the capital’s city center, the majority of them were not wearing masks, including dozens of motorcyclists dressed in biker gang garb executing burnouts.

Some guests waved “Trump 2020” flags, while others held posters with messages from Maori organizations, those who have been affected by lockdowns, and teachers who risk losing their jobs if they refuse vaccination.

After performing a massed haka on the grounds of parliament, demonstrators dispersed in a peaceful manner. The traditional Maori haka is performed for a variety of reasons, including intimidation, celebration, and mourning.

In Wellington, police said no arrests were made, but they were disappointed that so many people disobeyed coronavirus regulations.