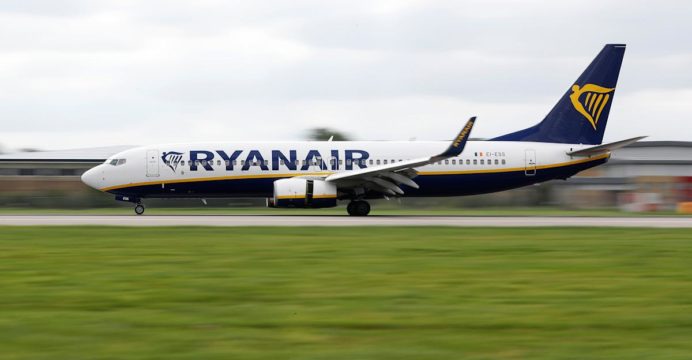 Ryanair says it is expecting to cut fares this winter to help boost passenger demand. While the airline has seen business picking up recently, it warned it was still recovering from the Covid-related collapse in air travel.

Ryanairreported a narrowing of half-year losses, but warned its annual deficit could hit €200m (£170m).

Boss Michael O’Leary told the BBC the industry was seeing a “very strong recovery” across Europe.

However, he said heavy price discounting would be needed to fill aircraft this winter.

Keeping prices low and passenger numbers high would “set us up strongly for a very strong recovery”, he said.

Mr O’Leary added that the number of empty seats per plane would shrink from around 20% to under 10% by next summer. The airline expects to return to profitability in the year ending March 2023.

“We’re seeing very strong recovery in short-haul travel across Europe and it is being led by Ryanair,” he told the BBC’s Today programme.

The recent school holidays had seen Ryanair “full to the gills as people got a last bit of sun”, Mr O’Leary said. But that did not mean the hit to the industry from the coronavirus pandemic was over, he added.

The carrier reported an after-tax loss of €48m for the six months to September, which compared with a loss after tax of €411m a year earlier.

Ryanair carried 39.1 million passengers in the six months to the end of September, 54% fewer than in the same period of 2019.

The airline is expecting to make of loss of between €100m-200m for the full year, but Mr O’Leary said the guidance could not be more specific because there was still “little visibility” on ticket prices and recovery.

But he said the post-pandemic recovery offered the best growth opportunities of his three-decade career. In September, Ryanair lifted its passenger growth target. The airline now expects to fly 225 million passengers a year by 2026, up from 200 million previously forecast.

The airline reiterated it expects to return to pre-Covid profitability in the year ending March 2023.