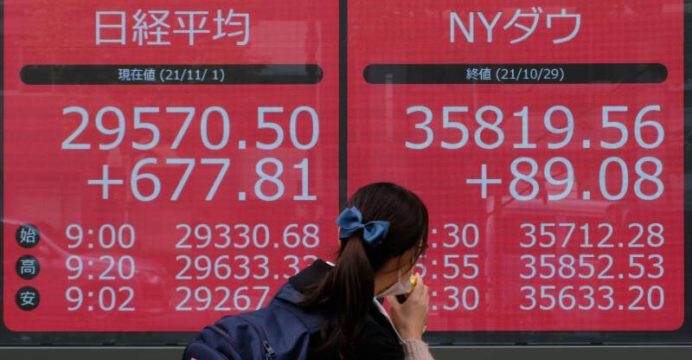 Most Asian markets rose on Monday, with Tokyo leading the way

Most Asian markets rose Monday, with Tokyo leading the way as a win for Japan’s ruling party in a weekend general election fuelled hopes it will push ahead with a fresh stimulus, though Hong Kong was hit by data showing further weakness in China’s economy.

News that inflation had hit a 30-year high in the United States and a 13-year peak in the eurozone added to long-running concerns that price rises are in danger of running out of control, while piling more pressure on central banks to tighten monetary policy.

The spotlight is now on the Federal Reserve’s meeting this week, where it is expected to unveil a timetable for tapering its vast bond-buying programme, while boss Jerome Powell’s statement afterwards will be followed for an idea about when it will start hiking interest rates.

“Given (the beginning of tapering) is well expected, more interest is likely to be in Chair Powell’s press conference and whether this hints the Fed is becoming less comfortable with the inflation picture and whether they are starting to see the case for multiple hikes in 2022 as the market is pricing,” said National Australia Bank’s Rodrigo Catril.

The decision comes as the Bank of England is tipped to lift rates this week, following in the footsteps of other financial authorities in South Korea, New Zealand and Singapore, among others.

While investors are coming to terms with the prospect of rising borrowing costs, markets continue to press higher, with all three main indexes on Wall Street ending at records on Friday, thanks to a largely healthy earnings season.

Tokyo took up the mantle in Asia on Monday, rallying more than two percent after Prime Minister Fumio Kishida won a strong majority in the weekend poll, giving him the freedom to push through a big-spending spending programme to kick-start the stuttering economy.

He has previously said he would pursue a programme worth tens of trillions of yen.

The win for Kishida also provided some optimism for stability in Japan, where years of political upheaval has fanned market uncertainty.

There were also gains in Shanghai, Sydney, Seoul, Singapore, Taipei and Jakarta.

The reading will add further pressure on the government to provide more support for the world’s number two economy, but having to tread a fine line as they battle to contain inflation.

Still, while investor sentiment has waned over the past year, observers remain upbeat.

“Having been bullish on equities it feels right to turn a touch more cautious this week,” Chris Weston, at Pepperstone Financial, wrote in a note. “Although, the fact that equities have held up so well considering the rapid repricing of interest rates is certainly a positive.”