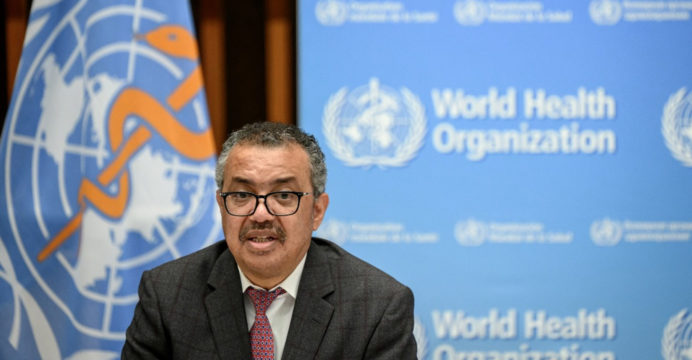 Tedros Adhanom Ghebreyesus set to stay on as WHO chief

Tedros Adhanom Ghebreyesus, one of the most visible individuals during the Covid-19 outbreak, is the only contender for the World Health Organization’s top job when his current term ends, the WHO declared on Friday.

Covid-19 “ravaged the world,” the Ethiopian former health and foreign minister wrote in his application letter, and he wanted to make sure the world was “really ready” to face another similar disaster in a second term.

His five-year term as Director-General of the World Health Organization (WHO) expires in August.

“By the September 23, 2021 deadline, member states had only recommended one candidate: Dr Tedros Adhanom Ghebreyesus,” the WHO said in a statement.

According to the UN health organization, Tedros was nominated by 28 countries.

Austria, France, Germany, the Netherlands, Portugal, Spain, and Sweden were among the 17 European Union members who backed him.

In their nominations, Germany and Spain stated that strengthening the WHO in the aftermath of the pandemic “must continue with full and undivided dedication,” and that the organization required “strong, pragmatic, and visionary leadership.”

According to the WHO announcement, Bahrain, Barbados, Botswana, Cook Islands, Indonesia, Kazakhstan, Kenya, Oman, Rwanda, Tonga, and Trinidad and Tobago have suggested Tedros.

Indonesia stated that the globe was still dealing with the pandemic and that “continuous leadership within the WHO” was required.

Kenya, Oman, and Rwanda all stated that Tedros “is ideally positioned to continue in the post.”