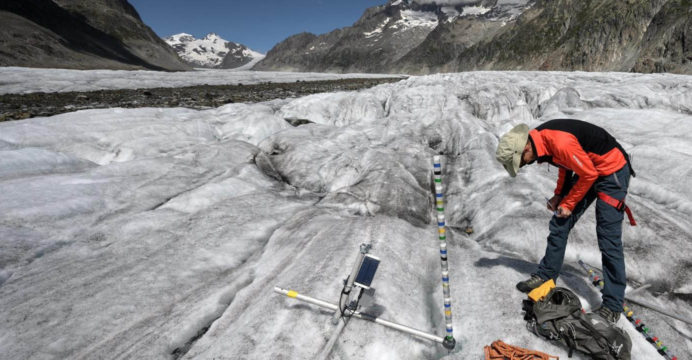 Switzerland’s glaciers are continuing to shrink as a result of climate change, even if snowfall was heavy this year and the summer comparatively cool, a top scientific panel said on Tuesday.

“The volume of Swiss glaciers decreased by almost one percent in 2021, in spite of plentiful snow in winter and a pretty cool summer,” the Cryospheric Commission of the Swiss Academy of Sciences said in a report.

“In terms of weather, the conditions were right in 2021 to give the glaciers a breather,” the report said.

“Unfortunately, in times of climate change, even a ‘good’ year is not good enough for the glaciers: The loss of ice continued, albeit at a slower pace, despite abundant snow in the winter and a comparatively cool and mixed summer weather.”

The snowfall was heavier than usual in May, the panel said.

“Nevertheless, the melt had been considered by the end of September, and throughout Switzerland, some 400 million tonnes of ice had been lost over the last 12 months, almost one percent of the remaining glacier volume.”

“Although the losses were smaller than in recent years, no gains were recorded for any of the glaciers,” the report said.