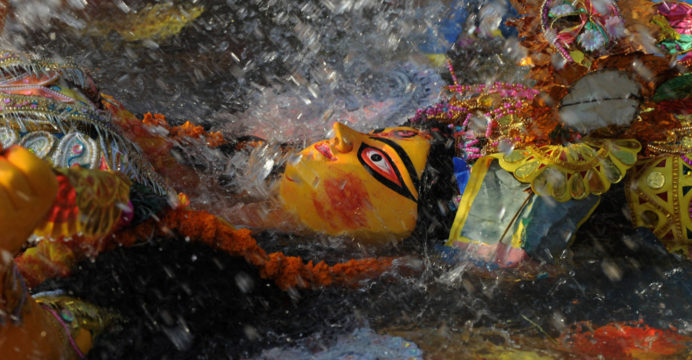 Durga Puja ends with immersion of idols in country

The five-day Durga Puja, the Bangalee Hindu community’s major religious celebration, culminated today with the immersion of Goddess Durga’s and her children’s idols in water bodies around the country amid festivities.

Due to the Muslim community’s Jummah prayers at that time, the procedure of immersion of the idols began at 4 p.m. today instead of noon.

The five-day Durga Puja began on October 11 with the performance of Maha Shasthi puja, Chondipath, the Goddess Durga’s incarnation (Bodhon), and Adhibas in temples across the country amid celebration and religious enthusiasm while adhering to health rules.

The puja was held in temples, houses, and public spaces, with stage decorations that were only ephemeral.

Maha Nabami Puja was observed across the country yesterday. The Maha Nabami ceremonies begin with a mahasnan and a Shodashopachar puja, commemorating Durga’s victory over the evil Mahishasura.

Yesterday, representatives from various political and social groups, as well as cabinet ministers and members of parliament, paid visits to several Puja Mandops throughout the city.