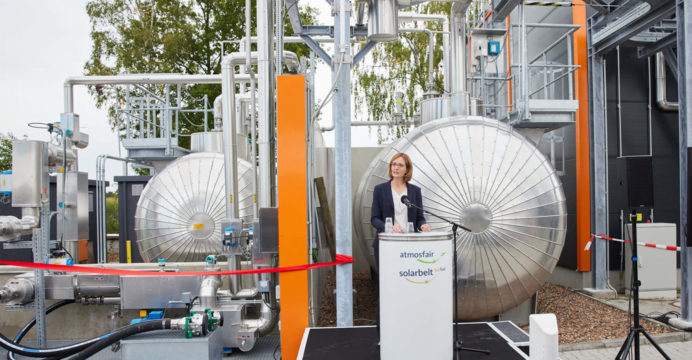 Sustainable fuels are viewed as critical to achieving carbon-neutral flight. However, there are some significant roadblocks in the way of these cleaner alternatives getting off the ground.

The nonprofit company Atmosfair has inaugurated the world’s first plant to manufacture carbon-neutral jet fuel on the same day that the International Air Transport Association (IATA) announced a goal to achieve “net zero” CO2 emissions by 2050.

The company, which sells carbon offsets for flights, revealed on Monday that its plant in Emsland, Germany, will start generating eight barrels (about one ton) of synthetic kerosene per day in early 2022. The cost of the project and how it was funded were not disclosed by Atmosfair.

Synthetic kerosene, also known as e-kerosene or power-to-liquid (PtL), is thought to have tremendous potential for reducing the aviation industry’s carbon footprint. However, there are a few reasons why green fuel has yet to gain traction.

Because planes are powered by fossil-based kerosene, flying is one of the most carbon-intensive modes of transportation. The aviation industry contributes between 2% to 3% of global CO2 emissions, and it aims to cut its carbon footprint in half by 2050 compared to 2005 levels. However, decarbonization will be a major problem.