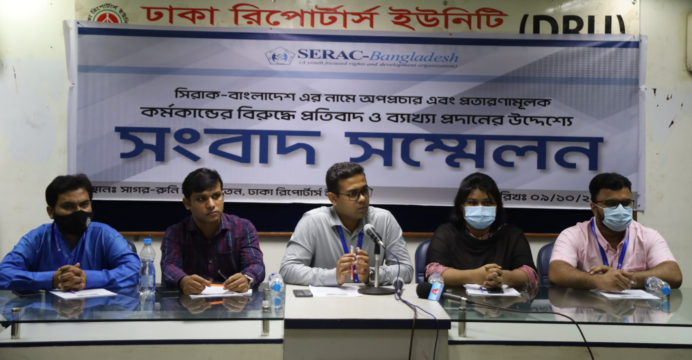 SERAC-Bangladesh protests against the propaganda and deceitful act

SERAC-Bangladesh, a well-known youth focused non-profit organization registered with the NGO Affairs’ Bureau under the Prime Minister’s Office, and is in Special Consultative Status with The United Nations Economic and Social Council (ECOSOC) has organized a press conference on Saturday morning at Sagar-Runi Milanayatan of the Dhaka Reporters Unity.

The organization’s representatives included Executive Director SM Shaikat, Assistant Director (Finance and Admin) Md. Shohrab Hossain, Program Manager Tasnia Ahmed, Senior Program Officer Md. Mahabub Sharker and Advocate, Bangladesh Supreme Court Md. Ershadul Bari Khandakar. Through a written press note Program Manager, Tasnia Ahmed informed the media representatives, “Very recently, some anonymous persons and organizations with malicious intentions have deceived some local people in the Jhenaidah district using our distorted logo, name, and other information illegally, and unnoticed without our permission, and are accused of embezzling cash by tempting various people in the name of giving loans. Among the victims some of them had started contacting us from 03.10.21 by collecting our contact number through our website and that was the first time we came across this incident. On our own initiative we contacted the victims, collected necessary information and initially confirmed this as an incident of fraud, and later we filed a General Diary (GD) with the DMP’s Pallabi police station.”

“Through the media, we also came to know that the victims filed a case at the local police station in the name of the unknown accused. We hope that through a thorough investigation it will be possible to bring out those involved in this heinous act to justice as soon as possible so that such crimes do not occur again. Notably, SERAC-Bangladesh never worked in the district of Jhinaidah and neither it had any office as such. The fraudsters used fake Microcredit Regulatory Authority Certificate (MRA) numbers on their fake sign boards which never belonged to SERAC-Bangladesh. Even SERAC does not have any kind of financial activities (loans, deposits, grants, etc.) anywhere in the country. All the activities of the organization are published in detail on the website.”

“Thus any such activities mentioned prove to be completely false and bogus. We show our deepest concern to this subject. The organization is a renowned entity for serving issues of youth, development and policy advocacy both in national and international platforms with reputation. SERAC is aware of the policy that the statements of those against/contrary/ to whom the news has been published should be contacted beforehand. After the incident, several local and national media outlets went on mentioning the name of this organization in a misleading manner without even contacting us.” 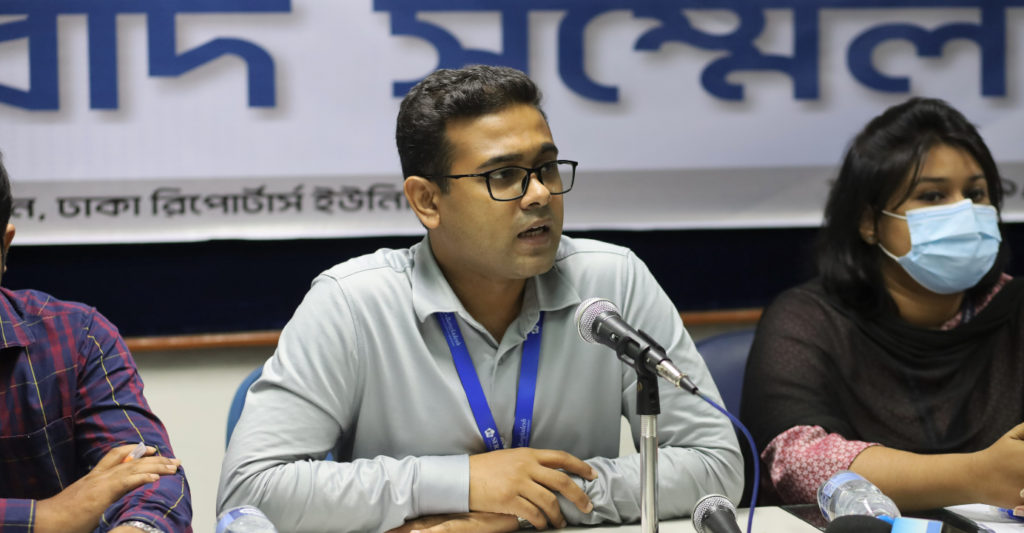 “We believe it did not reveal the truth rather provided completely false and fallacious information along with keeping our organization’s reputation and the victims losses at stake which has also led to offending thousands of young people affiliated with this organization. We also believe that the reputed media of the country will inform the public by being cautious and publishing vigilant news so that no innocent institution or individual is harmed unnecessarily and will also help the law enforcement agencies to find the real culprits.”

The Executive Director of SERAC- Bangladesh, SM Shaikat, has expressed his deepest concern and mentioned that SERAC-Bangladesh has never had any office or has run activity in Jhenaidah district before. Furthermore, there is no affiliation of our head office or any branch offices with the fake organization or any of the unidentified persons involved with this act. We consider that through such heinous activities they have tarnished the image of our organization as well as harmed the public. He also added, “to stop such deceitful incidents it is necessary for the local administration along with the financial organizations to be aware regarding such matters. We strongly demand that those involved be brought under justice immediately.”

The organization’s representatives assured that in case of any publication of news and investigation on the mentioned subject, if contacted SERAC-Bangladesh will provide fullest cooperation.