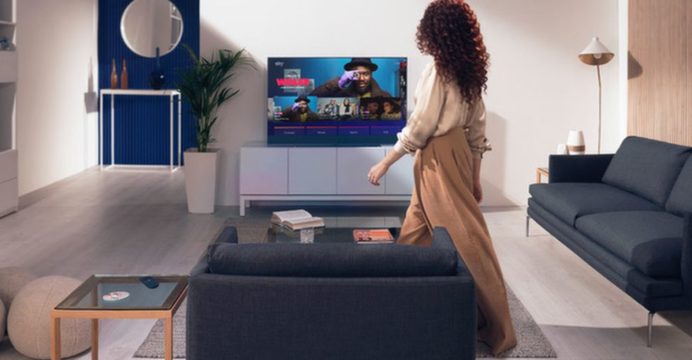 British broadcaster Sky is launching a TV that streams content via the internet, removing the need for a satellite dish.

One expert said it would put the broadcaster in direct competition with TV makers such as Samsung and Sony.

Another said while ditching the “outdated satellite dish” was long overdue, it was “an expensive way to watch TV”.

Sky Glass eliminates the need for an external box – and with built-in Dolby Atmos, there is no need for a sound bar either.

“We believe this is the smartest TV available.”

Although it will require a Sky subscription, content from BBC iPlayer, Amazon, Netflix, Disney+, ITV Hub and All4 will also be available.

Sky has not yet named the hardware partner who will make the device.

It has also not explained how exactly it plans to stream its content over the web, without delays or buffering.

If someone wishes to cancel their Sky subscription after purchasing the TV, they will still be able to use the TV but will lose some of the more advanced features, such as voice control and playlists.

While the move to deliver content over the internet rather than via satellite would bring “its own challenges”, Sky’s decision made a lot of business sense, independent technology analyst Paolo Pescatore said.

“By not having a satellite dish, you lower costs and increase margins,” he said.

“Providing your own TV set and persuading people to sign up for a subscription, that is extremely lucrative for Sky.”

In future, Sky may offer discounts on the TV with its broadband offerings too, he said.

Sky already offers TV via broadband in Italy, and Germany, via its Sky Q set-top box.

This bolder move into hardware would also put it in direct competition with TV-makers such as Samsung and Sony, who bundle Sky content with their devices, Mr Pescatore said, and hasten “the demise of the set-top box”.

The TV can either be paid for as part of an existing subscription or bought outright.

Buying the smallest version of the TV upfront will cost £649 and will need an additional subscription to Sky. The larger versions will be £849 and £1,049 respectively.