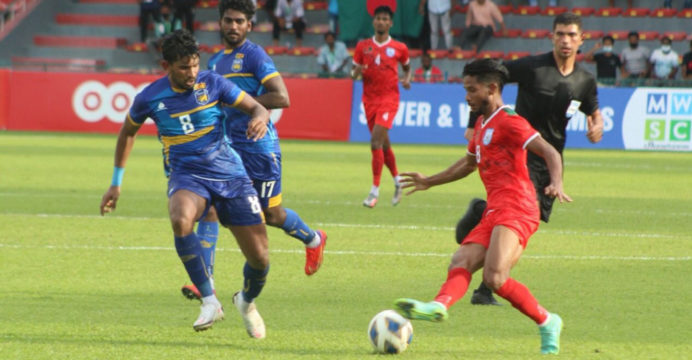 Bangladesh faced their first setback as they went down a 2-0 goal defeat to host Maldives in their third encounter of the SAFF Championship held on Thursday night at National Football Stadium in Male, the capital of Maldives.

Despite the fourth consecutive loss to Maldives, Bangladesh however, are still has a chance to get to the final in the five-team table with four points from three matches. The Maldives, who were bottom of the standings, moved a place up with three points from two outings.

It was do or die match for Maldives against Bangladesh since they understood it very well that it would be a quite tough assignment for them to stage a fight back in the tournament if they lose the vital match to Bangladesh. But, Hamza Mohammad and Ali Ashfaq did not allow that to happen as the two Maldives forwards grabbed critical victory and departed the field with full three points for Maldives.

Bangladesh, however, challenged well the Maldives in the first half by maintaining the score line goalless, but in the second half, they failed to offer resistance against the hosts and conceded two goals.

After the resumption, Maldives continued their onslaught and Hamza Mohamed ultimately supplied the breakthrough in the 55th minute when he blasted the ball home with an overhead bicycle kick.

The Maldives extended their advantage during a counter-attack in the 74th minute when Sohel Rana brought replacement Niaz Hossain down inside the danger zone and referee pointed the spot kick in favor of Maldives. Prolific Maldives striker Ali Ashfaq made no mistake to convert the spot.

Bangladesh nonetheless attempted heart and soul to launch a fight back in the encounter but failed to narrow the deficit in the remaining session.

After the match, Bangladesh head coach Oscar Bruzon said that the host were better than his squad throughout the ninety minutes and the key difference was intensity.

He stated the Maldives was much more lively than his squad because they found enough time as they played their last match five days ago while his team could not sustain the momentum as his lads played back-to-back matches in seventy two hours.

The men in red and green will play their last match of the tournament against the Himalaya Kingdom Nepal on October 13 with a quest to qualify for the final.

Earlier, Bangladesh got off to a winning start in the tournament upsetting Sri Lanka by 1-0 goal in their tournament opening encounter and forced favoured India to play 1-1 goal draw in their second match.