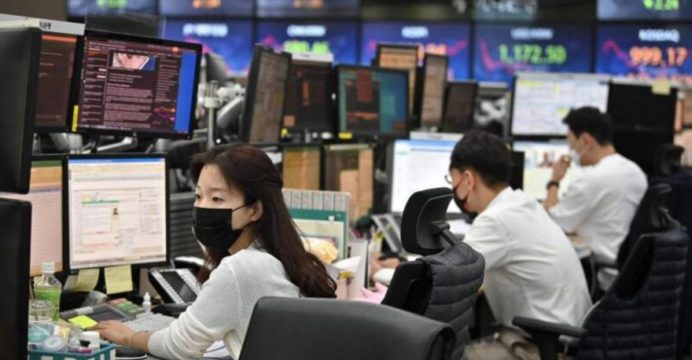 Asian markets tumbled on Tuesday, extending a global rout that saw Wall Street slump, as soaring oil prices put further upward pressure on inflation while a standoff in Washington over raising the country’s borrowing limit fuelled fears of a catastrophic US debt default.

Investors were nervously monitoring developments in the crisis surrounding troubled property giant China Evergrande, which has raised warnings about contagion in the world’s number two economy and possibly beyond, reports BSS.

A decision Monday by OPEC and other major producers not to increase their output by more than previously agreed — despite tightening supplies and rising demand — sent crude prices rocketing, with WTI hitting a seven-year high and Brent a three-year peak. Both main contracts rose on Tuesday.

The announcement fanned expectations that inflation, already sitting at multi-year highs, will spike further, putting pressure on central banks to taper their ultra-loose monetary policies sooner than flagged with interest rates to then rise.

And some analysts are warning of a period of stagflation, in which prices surge while economic growth stalls.

Crude markets have come under pressure as the global economy emerges from the pandemic, pushing up demand for travel, among other things, while the approaching northern hemisphere winter has seen gas prices jump, which has in turn led companies to switch to oil.

“Prices are likely to remain supported in the final quarter, with gas-to- oil switching and pricey coal adding to oil consumption,” Will Sungchil Yun, an analyst at VI Investment Corp, said.

All three main indexes on Wall Street ended deep in the red, led by the Nasdaq, as tech firms took a beating owing to their susceptibility to higher interest rates.

And the losses continued in Asia, with Tokyo briefly losing as much as 3.5 percent before edging back slightly.

Seoul shed more than two percent, while Singapore and Wellington were off more than one percent. There were also losses in Hong Kong, Sydney, Taipei and Manila.

“We think there is going to be more volatility in these markets,” Emily Weis at State Street told Bloomberg Television. “It’s not going to be the same sort of ‘risk assets always go up over time’ story that maybe happened in the rebound from Covid.”

Investors are growing increasingly nervous about US lawmakers bickering over lifting the debt ceiling with around two weeks of cash left, leaving the country on the brink of a historic debt default that several experts including Treasury Secretary Janet Yellen warned would cause a financial crisis.

The crisis in China’s property sector remained on investors’ minds, with news that developer Fantasia Holdings was in trouble after failing to make a payment to bondholders adding to concerns about the broader impact from the woes at indebted Evergrande.

With the real estate colossus teetering, there are concerns that its collapse would reverberate through the world’s number two economy, with the property industry a major driver of growth.

There was no word from the firm Tuesday, a day after it suspended trading in its Hong Kong shares pending an announcement on a “major transaction”. The halt came as reports said Hong Kong real estate firm Hopson Development Holdings planned to buy a 51 percent stake in Evergrande’s property services arm.