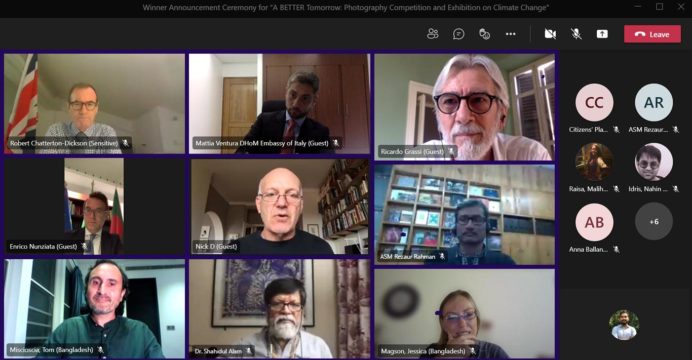 The British Council, the British High Commission in Bangladesh and the Embassy of Italy in Bangladesh, organised a photography competition on climate change, in cooperation with Drik Picture Library Bangladesh, Picture People UK and Fondazione UniVerde, Italy.

With the theme A Better Tomorrow, the competition was open for submission in August, with three categories – My Beautiful Planet, Planet in Crisis, and Hope for the Planet. Around 2100 entries were submitted by 433 youth across Bangladesh. A panel of reputed international judges from Bangladesh, the UK and Italy selected 30 finalists and from among these the winners were announced.

HE Robert Chatterton Dickson, British High Commissioner to Bangladesh said: Evidence of the climate emergency is all around us, and the COP 26 Summit in Glasgow represents a last opportunity for the world to come together to keep the global temperature rise to 1.5 degrees. This photo competition, organised by the British Council, the British High Commission and the Italian Embassy in Dhaka enables young people in Bangladesh to show what matters to them – both the problems and the promise of tackling the climate and environmental crisis. The images are striking and memorable. I am pleased to support this exhibition as part of the wider UK-Italy climate partnership.
HE Enrico Nunziata, Ambassador of Italy in Dhaka said: While the competition was administered in Bangladesh, the aim is to ensure that the selected images are seen by a large public in the events leading to the conference in Glasgow and raise awareness on climate change as a global emergency. A digital exhibition of all 30 finalists will be accordingly organised at the MEET Digital Culture Center in Milan from 28 September to 2 October which coincides with the pre-COP Youth4Climate Summit, attended by around 400 youth delegates from around the world.

Tom Miscioscia, Director Bangladesh, British Council said: The scale of engagement and quality of submissions we received for this photography competition highlights the importance of the arts in raising awareness of shared global challenges such as climate change. It is fantastic to see so many young people from across Bangladesh engaged in the initiative. Ultimately it is their generation that will lead the way in identifying solutions to climate change problems that will benefit us all.

The British Council and its partners plan to hold an in-person awards ceremony for the winners in November this year.