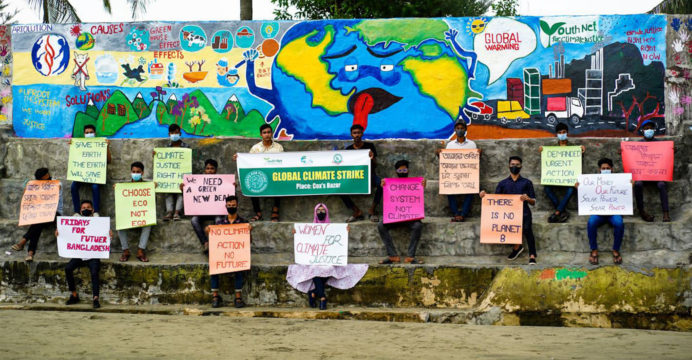 “We no longer want to hear the empty rhetoric of world leaders, it’s time to build a world free of carbon and inequality,” young people in various parts of Bangladesh have gone on a global climate strike, chanting slogans.

To minimize carbon emissions, they want international leaders to stop investing in fossil fuels and instead invest in green and environmentally friendly fuels, as well as enact equitable compensation pledges for climate-vulnerable countries like Bangladesh. On Friday afternoon (September 24), a human chain in front of the National Press Club made the demand. More than 100 young people, including 15 representatives of the third sex, took part in the strike. It urged for the Paris Agreement to be implemented, as well as placing pressure on underdeveloped countries to keep global warming below 1.5 degrees Celsius.

Speakers at the protest emphasized that in order to minimize carbon emissions, rich countries and multinational firms should stop investing in fossil fuel-dependent electricity. For a long time, these governments and organizations have made false pledges to reduce carbon emissions in order to avoid climate change. Some of them are Japan, the United States, General Electronics, Sumitomo Corporation, JICA, and HSBC Bank. They are referred to as a global association in climate pollution by Youthnet for Climate Justice. As a result, a false award or mock award on climate change is produced to deter various polluting countries and organizations from funding fossil fuels.

Climate strike organizers in 15 districts around the country voiced sympathy with the demand for a worldwide climate strike for the future on Friday, as well as the strike by young people on the streets and online in over a thousand locations across the world. Dhaka, Chittagong, Barisal, Khulna, Sylhet, Cox’s Bazar, Bagerhat, Sunamganj, Jhalokati, Moulvibazar, Noakhali, Patuakhali, Satkhira, Feni, and Shariatpur are among the 15 districts that have seen simultaneous global climate strikes this year. Human chains, walks, storytelling, music, and theatre are used by the school, college, and university students to highlight the climate problem with hand-painted banners, festoons, and placards. Young people are aided in their tasks by their parents and community members.