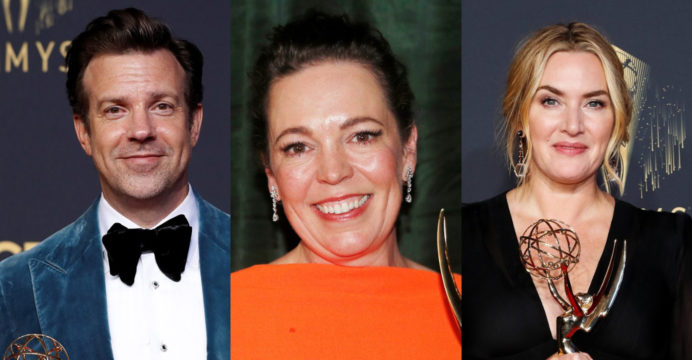 “What a lovely end to the most extraordinary journey with this lovely family,” Colman said of her final series playing Queen Elizabeth II.

“I loved every second of it and I can’t wait to see what happens next.”

Becoming emotional, she added: “I wish my dad was here to see this. I lost my daddy during Covid, and he would’ve loved all of this.”

The Crown’s victory in the best drama series category is not the first time a streaming service has won the top prize at the Emmys, but it does mark the first victory for Netflix.

Anderson won for her portrayal of Margaret Thatcher, Menzies for the Duke of Edinburgh, and O’Connor for Prince Charles.

Many of this year’s nominated actors from The Crown left the show after its most recent series, including Emerald Fennell, who played the Duchess of Cornwall, and Colman, who will be replaced as the Queen in the forthcoming fifth season by Imelda Staunton.

The 73rd Primetime Emmy Awards took place in Los Angeles on Sunday and saw most nominees attend in person, although many British nominees appeared from a separate hub in London.

UK winners included Michaela Coel, who won outstanding writing for a limited series for her consent drama I May Destroy You. “I dedicate this story to every single survivor of sexual assault,” she said as she collected her award.

Coel also used her speech to address aspiring writers, telling them: “Write the tale that scares you, that makes you feel uncertain, that isn’t comfortable, I dare you.”

She said staying away from social media could help them to create their best work. “Do not be afraid to disappear, from it, from us, for a while, and see what comes to you in the silence,” she said.