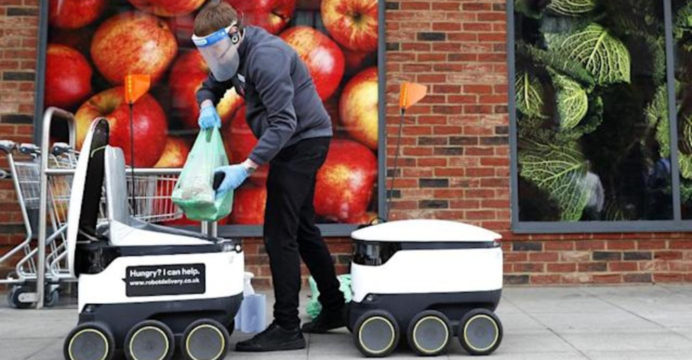 The Co-op announced a partnership with Amazon Prime, enabling customers to do grocery shop online with same-day delivery

The Co-op has announced a partnership with Amazon Prime, enabling customers across the UK to do their whole grocery shop online with same-day delivery.

The supermarket chain is also extending its robot deliveries, so it can push online sales up from £70m to £200m, reports BBC.

The partnership launched in Glasgow and surrounding areas on Thursday and will be rolled out to other parts of the country before the end of the year.

But the GMB union has accused the Co-op of compromising its ethics.

Amazon Prime customers will be able to do their shopping on the Amazon UK website.

Same-day delivery with two-hour scheduled slots is offered for free on all orders over £40. The minimum value for an order is £15 and a £3.99 delivery charge applies to all orders below £40.

Two towns in England – Milton Keynes and Northampton – are already receiving Co-op grocery deliveries from autonomous robot vehicles made by Starship Technologies, a firm set up by the founders of Skype.

The supermarket chain plans to increase the number of robots operating and delivering Co-op groceries from 200 to 500 by the end of this year, extending them from Milton Keynes and Northampton to Cambridgeshire and then into northern England.

“We are delighted to be working with Amazon. Its reach and leading technology and innovative approach means greater convenience for people in their communities.”

Reaction to the news
But GMB national officer Andy Prendergast criticised the move: “It’s really disappointing to see a company with a proud ethical heritage like Co-op teaming up with Amazon: a tax-evading multinational with a horrifying health and safety record.

“Workers in Amazon warehouses are treated like robots. They are knocked unconscious, suffer broken bones and are taken away in ambulances in their desperate pursuit of unrealistic targets.”

The union added that it had concerns about the amount of tax Amazon pays in the UK, as well as the fact that bosses had failed to recognise a union to protect Amazon workers’ rights.

Amazon said it offered “excellent pay, benefits and opportunities for career growth, all while working in a safe, modern work environment”.

“Who can successfully – and profitably – get products ordered on mobile devices to customers in the shortest possible time, so they don’t even have to bother with shops at all,” he said.

“Demand for this type of fast, no-hassle service will only increase in line with the ability for consumers to order products easily, with one-click, directly from social media or through QR codes.”