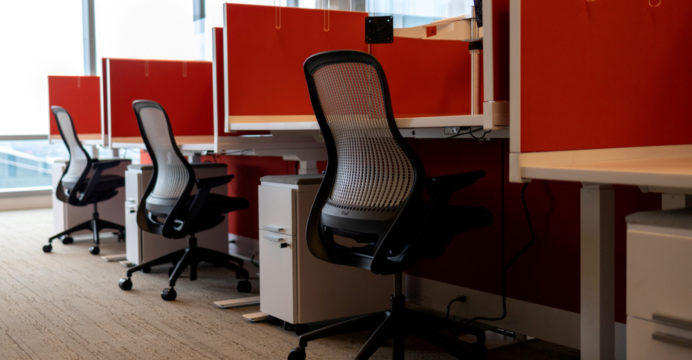 Most people do not believe workers will return to the office full-time after the coronavirus pandemic, an exclusive survey for the BBC suggests.

A total of 70% of 1,684 people polled predicted that workers would “never return to offices at the same rate”.

The majority of workers said that they would prefer to work from home either full-time or at least some of the time, reports BBC.

But managers raised concerns that creativity in the workplace would be affected.

Half of 530 senior leaders also surveyed by polling organisation YouGov for the BBC said that workers staying at home would adversely affect both creativity and collaboration – against just 38% of ordinary people.

Bosses at big firms such as investment bank Goldman Sachs and tech giant Apple have rejected calls for more flexibility, with the former even calling working from home an “aberration”.

Managers and members of the public surveyed for the BBC agreed, however, that neither productivity nor the economy would be harmed by continuing work-from-home policies.

BT’s chief executive Philip Jansen, for example, told the BBC that it is planning to let most of its office workers work on-site three or four days of the week in future – although thousands of its engineers won’t be offered the same flexibility.

“We are a people business so collaboration, dynamism, teamwork, creativity… is really important to us,” he said.

According to the research, more than three-quarters of people believe their boss will allow them to continue working from home some of the time.

According to the latest official figures, the proportion of workers who did at least some work from home in 2020 increased to 37%, up from 27% the previous year.

Maisie Lawrinson joined TalkTalk through the government’s Kickstart jobs scheme in July. Under the scheme, Jobcentre work coaches match young people aged between 16 and 24 who are on Universal Credit to new, temporary, roles.

While Maisie is grateful for the six-month contract, she’s keen to be in the office as much as possible so she can make a good impression.

“I’ve never had a job where I’m speaking to people online or emailing,” she says, referring to her past experience in retail.

She adds: “I’m more productive when I am in the office because it’s more of a professional environment and you get to see people.”

Having started the role remotely, she only got to meet her colleagues for the first time in-person recently.

“We recently had team drinks and I finally got to meet everyone. It was really nice, I got to see everyone in person and get an idea of who they are, rather than just what their email is.”

She says she will still take the opportunity to work from home some days, though, perhaps towards the end of the week.