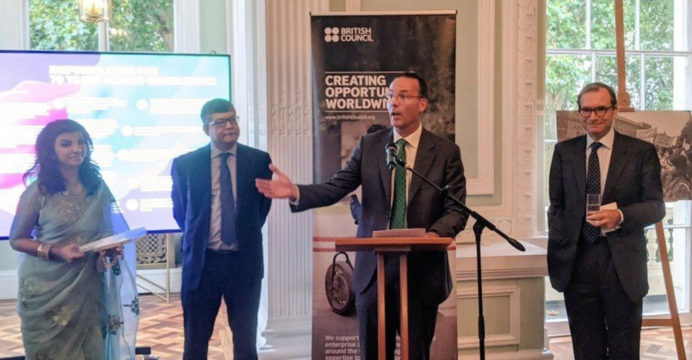 As Bangladesh celebrates 50 years of its extraordinary journey as a nation, this year also marks 70 years since the British Council opened its first office in Dhaka. To celebrate the strong cultural connections between the people of the UK and Bangladesh, the British Council in Bangladesh recently hosted a reception at the British Academy in London, which coincided with the fourth UK – Bangladesh Strategic Dialogue.

Commenting on the strong binding ties between the UK and Bangladesh, Scott McDonald Chief Executive, British Council said, ‘We are very proud to have been part of Bangladesh’s remarkable journey. It’s been a privilege to play our part in connecting the people of Bangladesh and the UK – building trust and making friends across time and space. The last half century has seen great achievements for Bangladesh, and many developments in the relationship between Bangladesh and the United Kingdom. The British Council takes great pride in being part of that history, and we look forward, with real excitement, to the next chapter of the story’.

Highlights from the photography exhibition ‘London 1971: The Unsung Heroes of the Bangladesh’s Liberation war’ were also displayed to coincide with the Strategic Dialogue. This exhibit showcased 40 rare photographs exploring the role that the people in London played in Bangladesh’s liberation movement in 1971. The Liberation War of Bangladesh instigated a massive uproar in the international community, especially among the Bangladeshi diaspora in the UK, and the movement in London was among the most prominent of its kind.

The British Council is committed to reinforce strong people to people relations between the UK and Bangladesh, engaging individuals, governments, and strategic partners across English, education, the arts and culture. Throughout 2021, the British Council is celebrating 70 years of cultural relations between the people of the UK and the people of Bangladesh.