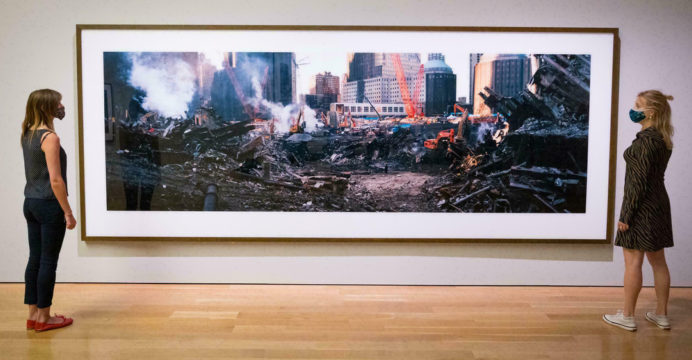 Wim Wenders, a legendary German filmmaker, presented an exhibition of his images portraying the devastation inflicted by the 9/11 attacks in London on Friday, which he believes would also express “surreal beauty.”

As workmen evacuated the site in November 2001, the disturbing photographs reveal the still-smoking remnants of the World Trade Center towers.

Wenders said at the exhibition’s debut in London, “I had wanted the place to somehow tell me something, to give me a message.”

In the midst of the smoking wreckage and heavy layers of ash carpeting the ground, he remembered beams of sunlight filtering through the massive skeletons of the towers.

Wenders remarked, “A dreamlike beauty developed, and I saw it as a fantastic indication of hope that something lovely was blossoming.”

The celebrated filmmaker, who is best known for art-house classics such as “Buena Vista Social Club,” “Wings of Desire,” “Pina,” and “Paris, Texas,” expressed his wish that Ground Zero may be “forever a symbol of peace and healing.” Recent events in Afghanistan, including the ultimate withdrawal of US and NATO military personnel and the return of the Taliban, may provide his paintings “special resonance” for some tourists, he said.

Wenders has photographed widely throughout his career, establishing himself as a titan of European cinema while nurturing a decades-long love affair with the United States.

This devotion has become more visible in his filmmaking this century, particularly in the visually stunning 2005 family drama “Don’t Come Knocking.” His photographs have been published and displayed all around the world in the meantime.

The show will be on display at the South London Museum until January 9th.