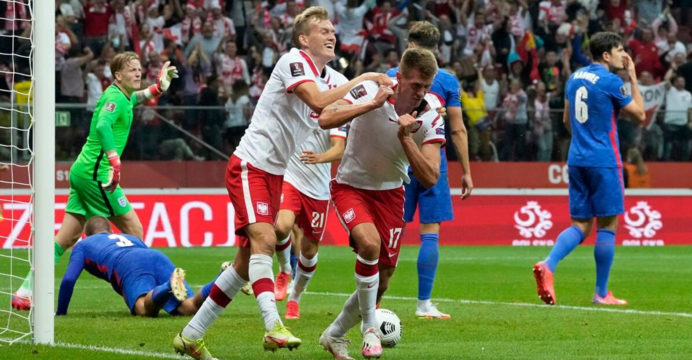 Big wins for Italy and Germany in the World Cup qualifiers

In the European zone, two heavyweights, Italy and Germany, have won major matches. Italy was defeated 5-0 by Lithuania. In addition, Germany was defeated 4-0 by Iceland. Poland, on the other hand, tied England 1-1.

In a Group C encounter, Italy takes on Lithuania. With a goal from Moyes Kin in the 11th minute, the Euro champs seized the lead. With a suicide goal in the 14th minute, Lithuania fell further behind. Jacumo Raspadoni scored in the 24th minute and Moyes Kin scored in the 29th minute to give Italy a 4-0 lead at halftime. Giovanni Lorenzo scored again in the 54th minute, giving Italy a resounding victory. With 14 points, the Azzurri maintained their lead in the group.

In the Group J encounter, Germany faced Iceland. Serge Ganabri, assisted by Lee-Roy Sun, gave the Germans the lead in the fourth minute. After Rudigar scored in the 24th minute, Hansie Flick’s team closed the first half with a 2-0 lead. In the 57th minute, Sane scored Germany’s third goal. Timo Werner scored in the 69th minute after missing multiple chances. Germany won 4-0 in the end.

In the Group I encounter, England, on the other side, faced Poland. The first half finished in a goalless tie, but England took the lead in the 62nd minute when Harry Kane scored a fantastic goal. However, in injury time, Lewandowski’s wonderful pass put Damien Semanski on the goal sheet, and Poland earned a point.

The match in Group E was likewise won by Belgium. Belgium also maintained its lead by defeating Belarus 1-0 with their second-tier team.