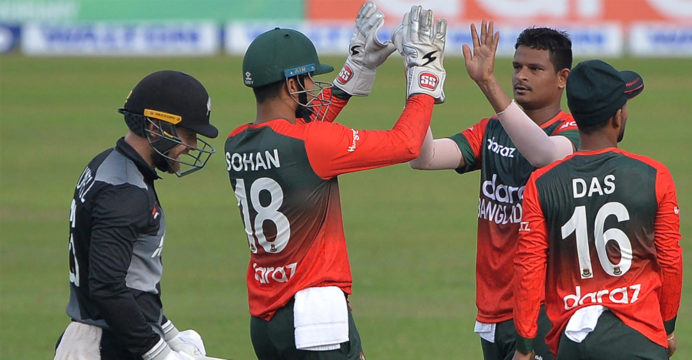 Bangladesh won the five-match Twenty20 International series against New Zealand today at Sher-e-Bangla National Cricket Stadium, courtesy to a superb bowling effort by left-arm spinner Nasum Ahmed and pacer Mustafizur Rahman, who bowled the side to a six-wicket victory.

The duel’s combined effort knocked New Zealand for just 93 in 19.3 overs, but Bangladesh’s victory was not as clinical as expected.

Captain Mahmudullah Riyad slog-sweeping offspinner Cole McConchie for a boundary in the penultimate over to lift the total to 96-4 in 19.1 overs.

Mahmudullah was unbeaten on 43 off 48 balls with one four and two sixes, saving the side from embarrassment after Ajaz Patel reduced Bangladesh to 32-3 in the sixth overs.

Bangladesh resumed their pursuit for a third series triumph before the Twenty20 World Cup.

Bangladesh won the first two games by seven wickets and four runs before losing the third game by 52 runs to New Zealand.

Patel baffled the batsmen with simple but accurate bowling after offspinner Cole McConchie broke through with the wicket of Liton Das for 6 runs.

When both Shakib Al Hasan (8) and Mushfiqur Rahim (0) played wild shots to be out in consecutive deliveries, the lack of patience of Bangladeshi batsmen aided him.

New Zealand saw an opportunity, but Mahmudullah Riyad squandered it. He began by partnering with Naim Sheikh for 35 runs to get the team back on track.

New Zealand had a ray of hope after Naim’s run-out dismissal for 29 runs. Mahmudullah, on the other hand, led the team to victory with calm.

Will Young batted alone for New Zealand, scoring 46 off 48 balls with five fours and one six.

While Nasum shredded New Zealand’s top order, Mustafizur worked his magic in the death overs, preventing the visitors from scoring more than 100 runs. New Zealand was dismissed for the second time below 100 points, with their 60 in the first match maintaining their joint lowest ever T20 International score.

Nasum struck in the first over after New Zealand chose to bat first, when Rachin Ravindra top-edged one to Saifuddin for a duck. He found extra bounce in his following over to get Finn Allen (12), who looked dangerous after reverse-sweeping Shakib Al Hasan for six.

The innings was stabilized by skipper Tom Latham and Will Young, who played with the prudence that the pitch needed.
After hitting 21, Latham was removed by offspinner Mahedi Hasan, who bowled with a quick turn. His ejection brought an end to a pivotal 35-run partnership.

Will Young displayed maturity in leading the batting despite the wickets falling all around him.

To calm down the visitors, Mustafizur used his trademark cutter and a slower pace. To begin his journey, he took the wicket of Tom Blundell (4), and afterwards cleaned out the tail with an exciting display of death bowling.

His four wickets included Young’s prized scalp, who was removed in the final over.

The remaining two wickets were shared evenly between Mohammad Saifuddin and Mahedi Hasan.